We want you to take 30 seconds to watch some of this video by 2008 Pitchfork-approved “it band” Vampire Weekend.

I’m sure the weekend vampires are all nice chaps, polite to a fault, and respectful of everyone they meet. And that, to me, represents everything wrong with their music. It’s so damned polite, so academy-approved, that it makes my stomach ache. Now, for the antidote:

Some thoughtful person captured TAD in its heyday, bulldozing their way through “Daisy.” We’ve mentioned here in the past that the attribute that we most miss with today’s Hot Young Bands is menace, and although the members of TAD were all apparently friendly to a fault, they packed their music full of menace. How we miss TAD!

Anyway, we’re going to keep this post short, because we’ve been slacking on the posts and because Tom is heading out to for a couple of weeks. This entry’s contributions to our ongoing Historia del la Musica Tad are . . .

(1) The “Wood Goblins” single. “Wood Goblins” and “Cooking With Gas” date from the Salt Lick era (1989); both were recorded by Steve Albini. “Cooking” also appeared as b-side to “Loser.” “Daisy” dates back to the period when TAD-the-band was simply Tad-the-man. We also posted “Daisy” years ago here.

(2) The “Jack Pepsi” single. This record resulted in one of TAD’s many legal troubles, as the Pepsi Corporation didn’t cotton to seeing its logo appropriated for something that rocks this hard. “Jack Pepsi” ranks high in our grunge canon—we definitely put it in the top ten. The b-sides, “Pig Iron” and “Eddie Hook,” come from expanded version of the single. Both rock. 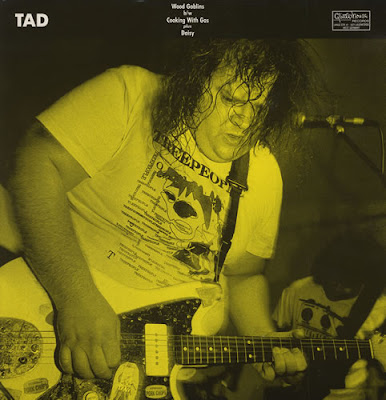 The zip file for this EP is here. 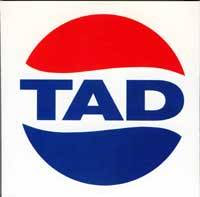 Sorry to keep this so brief, but we’re busy, busy men. We’re planning to follow this up with a piece about some of pre-TAD bands featuring TAD members, so stay tuned!