Saying Goodbye to 2008 with Crackerbash 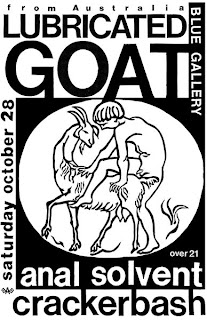 If there is a musical genre that has been more bastardized by amazingly wretched bands than grunge, it’s probably Emo. While we never flew the Emo flag or anything, we will proudly stand by some of the earlier, landmark emo bands. Rites of Spring? Still love them. Moss Icon? Sure, they had their moments. Antioch Arrow? Um, actually those guys were a bit ridiculous. And then there was Portland’s Crackerbash. Easily one of the greatest live bands to come out of Portland during the early 90s, Crackerbash obviously owed part of their abrasive pop-punk sound to the Revolutionary Summer bands (and the Wipers and SST bands), but they shouldn’t be seen as a precursor to today’s truly bizarre "emo" scene. But we are not here to knock the youth of today, ladies and germs. No, if they want to do this sorta shit, that’s fine with us. Instead, we are here to raise our glasses to Crackerbash and say, "Those guys were pretty good! You should check them out!"

Formed in 1989 by Hellcows guitarist Sean Croghan, bassist Scott Fox, and drummer Doug Nash, the band made their vinyl debut a year later with the sorta poorly mixed "Bike" b/w "Laughing Song" 7” on Audio Addict Records. Moving to Imp Records (Calamity Jane, Jackie O-Motherfucker) and handing over the drum stool to Ted Miller and the recording responsibility to Drew Canulette at Dog Fish Studios, their second single, "Holiday," sounded much, much better and showcased better songs.

By then, word on the street was that Crackerbash was a shit-hot live band, and Seattle’s Empty Records snapped them up for a couple records. Like Chapel Hill, Portland was set to become the next Seattle, and Crackerbash, Hazel, Sprinkler, Pond, and Heatmiser led the way. Of course, history can be a huge, unruly asshole, and the fact that Everclear was the sole platinum seller from that bunch is further proof.

The self-titled full-length and "Jasper" 7” came out around 1992, and while good, they didn’t fully capture the band’s live energy. Sub Pop made the band’s "Nov 1" b/w "Halloween Candy" (a Spinanes cover) the August 1992 Single of the Month, sandwiching Crackerbash between Codeine and the Mono Men. (Hopefully, you didn’t snooze when it was time to subscribe to Sub Pop's current series.)

Now for my money, the records that Crackerbash recorded with Kurt Bloch were their best. The Working Holidays September split single with Jawbox on Simple Machines Records and the Tin Top EP might be their loudest records and sound closest to their live show. Like all good punk bands, the band burned out early and broke up around 1994. Humble Records released a live 7” of their last show at La Luna; it may or may not be a boot.

Since this is the Holiday Season and we are crunk on spiked eggnog, we are including some odds and ends in the download file. “Your Gate” came from the Empty Sampler 2, and “Head Like A Weedeater” came from C/Z’s Teriyaki Asthma Vol 9, which also featured Trashcan School, Stymie, and Canada’s Superconductor. We should probably add that Superconductor contributed a decent version of the La’s “There She Goes” to this record that should (we hope) help you erase the horrid memory of the Sixpence None the Richer version. Sixpence None the Richer, if you are reading this, we are still waiting for your apology.

Anyhow, “The World According to Nouns" is a Minutemen cover that you can find on Little Brother's Our Band Can Be Your Life tribute compilation. Hazel, Treepeople, Unwound, Thurston Moore (of course), and a ton of other cool names also appeared on this record, so go track it down.

After Crackerbash exploded, Sean fronted the short-lived Jr High, who recorded a single and full-length for Empty Records before calling it a day. He did some solo stuff, which I don’t remember ever hearing, and now sings for Rapids. Scott joined up with Calamity Jane singer Gilly Anne Hammer for Starpower before reuniting with Ted in the cool instrumental band, Satan’s Pilgrims. Crackerbash did a few reunion shows over the years, and you can visit here to buy their live DVD.

And with this, we bid adieu with 2008. We hope your year was filled with grunge goodness and that St Nick left you those Cat Butt and Dickless All-Stars singles in your flannel stockings. Happy Holidays!

Get the zip of these tunes here.

"Back to School"b/w Jawbox "Falk"

"The World According to Nouns"