The record we’ve posted here is perhaps the worst possible introduction to the Young Fresh Fellows. But it’s also the best introduction.

Bassist Scott McCaughey formed the band in 1982 with Tad Hutchinson on drums and Chuck Carroll on guitar. Jim Sangster took over bass duties after their debut, The Fabulous Sounds of the Pacific Northwest, allowing McCaughey to switch to rhythm guitar. The band released Beans & Tolerance (the “official bootleg”)--the record we're posting--under the name 3 Young Fresh Fellows 3 (an homage to 3 Mustaphas 3) during the period after Carroll left but before Fastback Kurt Bloch joined. 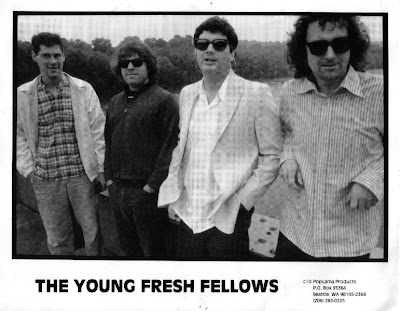 The Young Fresh Fellows were, in some ways, both an Everytown kind of band and also the quintessential Seattle band. They played a slightly amateur-ish, brisk, self-effacing power pop; we used to call this kind of music “college rock,” and they had a decent enough college campus following that a friend of mine informed me of a tribute band (The Empty Set, I believe) formed among undergrads at the University of Chicago.

But they also grounded their pop in the classic Seattle/Tacoma garage fuzz of the 60s: the Wailers, the Sonics, the Raiders. But millions of bands farm this same garden without really embodying the region that grew it, and this is what set the Young Fresh Fellows apart. It’s not just the northwest of Rockin’ Robbin Roberts and Paul Revere, but also that of Spud Goodman, Stan Boreson, and Bill Nye: The Science Guy. In fact, they based the cover of their debut on a record put out by Pacific Northwest Bell of the same name that featured literal sounds from the northwest (ferries, that kind of thing; samples can be found here. Hell, they even name-drop Alderwood Mall in the lyrics to “Searchin’ USA.”

(That same song also references Pauline’s Cafe in Bellingham, but I’ll be damned if I can remember a place by that name from my time in the ‘Ham. Readers?)

Anyway, back to Beans & Tolerance (or Simply Wonderful, Wonderfully Simple). Trouser Press writes this about it: “Recorded quickly with more enthusiasm than care, the twelve cavalier tunes — most in a gritty and/or psychedelic '60sish vein — add up to a joyous, rock'n'rolling studio party with massed backing vocals, one-take chaos, meandering guitar solos, bum notes and everything else that such great undertakings require.” Is this true? Yes and no. My feeling on the record is that it’s a fun diversion if you already know about the band. Otherwise, I’d start building your collection with just about any other of their records. But we do take delight in posting this, because it was rather rare even in its day and is way, way out of print, never to return. 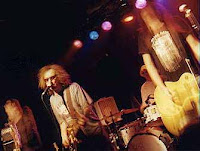 McCaughey has been busy lately with the much more earnest, jangly Minus 5 and the Baseball Project. I confess that I haven’t kept up with what he’s been up to, but I like what I hear here. Worth your time is Universal Trendsetter, a website devoted to McCaughey’s many projects. Some young, fresh person also posted an entire 80-minute concert from 1991 on youtube here.

Sadly, the mp3-hosting sites we've used are cracking down on people who use them to, um, host mp3s. Some idiots must be exploiting such sites to distribute the new Metallica for free instead of for the right reason, which is to ensure that you're able to hear "I Wanna Die in the Woman's Prison." So we'll likely just use zip files from here on out.
Posted by Lamestain HQ at 7:05 AM 23 comments: