So it’s 2000, and my admittedly crap band, the Recordbreakers, broke up after our drummer Brian quit to join an emo band and our bassist Kevin left to help form the much, much better Popular Shapes. After some shuffling around and twiddling our thumbs, the remaining Recordbreakers regrouped as the Catahoula Hounds with Jed on vocals/guitars, Andres on bass, and me on guitar. We kicked around for a few months without a drummer until Andres ran into Shawn, the shred-tastic guitarist from Portrait of Poverty, at a Valentine Killers show who said he was interested in playing drums with us. I think my first thought was, “the dude from Subvert wants to jam with us? Awesome!” 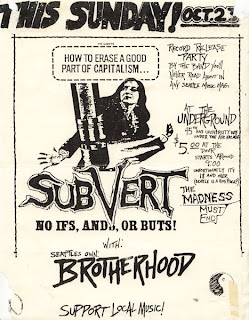 And why was I excited to jam with a member from Subvert? Because they were goddamn Northwest Hardcore legends! Kings of Tacoma’s Community World Theater and Rulers of KCMU’s Sunday night metal show, Brain Pain, Subvert stirred massive mosh pits from 1986 until 1991. They played fast, metal-tinged hardcore, which placed them in company with other Northwest bands like Poison idea and the Accused, but were more political than a lot of their crossover contemporaries. Think Amebix or Battalion of Saints-style thrash rather than Stormtroopers of Death or Excel.

Arizona’s Hippycore released The Madness Must End EP around 1988, which was recorded at Reciprocal Studios by Chris Hanzek. Germany’s Sellout Activities also did a pressing with different artwork and insert. Septic Death singer and Metallica shirt-designer Pushead also listed this record at 98 in the Top 100 of the 1980s – beating out the Dead Kennedys and Leeway! This record features Eric Greenwalt on vocals, Shawn Durand on screamin’ lead guitar, John Grant on guitar, Marc Brown on bass, and John Purkey on drums.

Subvert also appeared on the Hippycore Metal Gives Us a Headache compilation along with Dead Silence, Cringer (featuring the late Lance Hahn from J Church), Dissent, and a few other bands. You can check it out here.

They also released the Free Your Mind LP on the UK label, Raging Records. Produced by the band and Jerry Rejector (check out the Rejectors Thoughts of War EP here), the band thrashes so hard that your stinky dreads will stand up. You can find all of the band’s recordings on the self-titled CD on Selfless records, which came out sometime in the mid-90s.

After the band split, singer Eric Greenwalt played in Christdriver, who cut a record on the legendary crusty hardcore label, Profane Existence; he currently plays in Black Noise Cannon. Our man of the hour, Shawn, then hooked up with Flash from Apple Maggot Quarantine Area and formed Portrait of Poverty. He currently plays in Infect.

Now back to me.

The Catahoula Hounds songs are from an aborted Dirtnap records release around 2002 and were recorded in, I think, 3 days by Chris Hanzek at Hanzek Audio in Ballard. We previously recorded a demo with Chris, but it’s pretty bad and should be left forgotten.

The first song is an attempt to marry the Faces with the Lazy Cowgirls and features an attempt by me to channel the dexterity of Ross the Boss in the guitar solo, but instead I conjured a 14-year-old kid hanging out at Guitar Center. I don’t remember much about the 2nd song, but the 3rd song is noteworthy because it is probably the only garage punk song to include the phrase, “Drink from the Golden Chalice.” I believe Jed was trying to imagine a drunken David Lee Roth fronting a fantasy metal band during the ad-libbed bridge section, and in retrospect, we probably should have taken away his Magic: the Gathering gaming cards before he stepped foot in the vocal booth. Lesson learned. The last song was kind of an attempt at doing a Husker Du/Wipers sort of thing and appeared on the Dirtnap across the Northwest compilation. I don’t think we were happy with the performances or something, and we pretty much broke up during mixing and scrapped the record.

Thanks for taking a trip down memory lane with me and we’ll be back with some grunge stuff next time!

Get them all in a zip file here.