Well, we are reaching the end of our amazing 3-part series celebrating Issaquah, Washington and one of our favorite garage rock labels of all time, Regal Select, and we are going out with a bang: the Puget Power Act III EP (RS-14). Released in 1991, this EP is a split between Seattle and Portland bands and features Mudhoney, the Nights Kings, Calamity Jane, and Rancid Vat.

The Portland side begins with Calamity Jane, which featured singer/guitarist Gilly Anne Hanner, bassist Megan Hanner, and drummer Lisa Koenig. The band also did some singles on Tim/Kerr records, Sympathy for the Record Industry, Imp, and a few other labels before breaking up in the early-nineties soon after opening for Nirvana in Buenos Aires, Argentina. Gilly Ann later joined Starpower (with ex-Crackerbash bassist, Scott Fox), No 2 (with ex-Heatmiser, Neil Gust), and Braille Stars and performed as a solo artist.

Following Calamity Jane is now Texas-based, wrestling maniacs Rancid Vat, or the 2nd greatest band with “Rancid” in their name (#1 is Rancid Hell Spawn, of course). Rancid Vat contributed their version of wrestling star Adrian Street’s “Breakin’ Bones,” which is about how they are only happy when they break people’s bones. Awesomely enough, Rancid Vat weren’t the only Portland punk band made up of wresting fans. Greg Sage of the Wipers might have been the highest profile Portland punk musician/wrestling fan and even made his 1971 recording debut by backing up Portland wrestler Beauregarde for a now-reissued LP; he also posed in front of a bunch of wrestling photos, fliers, and articles for the back cover of his very fine 1985 solo debut record, Straight Ahead. For those of you taking notes, some of Rancid Vat’s members were also in Alcoholics Unanimous, who appeared on Puget Power 2.

The Seattle side starts off with one of my favorite Mudhoney songs, “Bush Pusherman,” which was recorded by Conrad Uno at Egg Studios and can also be found on the brilliant March to Fuzz retrospective double-CD. Following Mudhoney, Rob Vasquez makes a re-appearance on the series with the Night Kings’ song “Black Fluid.” Recorded at Vinyl Manor, the song is another reminder that Rob is the garage rock maestro and is sorely under-appreciated in Seattle. Once again, you can still buy copies of their great full length, Increasing our High, through Sub Pop.

Well, for now that’s it for Regal Select and Issaquah and we can safely say that we have put the town back on the map. Despite hometown boys Modest Mice People’s best efforts, Issaquah is a Rock and Roll Town, and Regal Selects reminds us of that (even if they didn’t release anything by any Issaquah bands). We’ll eventually get to the Puget Power 4 comp, the Kings of Rock, and a few other punk rock chestnuts on Regal Select, but until then enjoy the tunes. 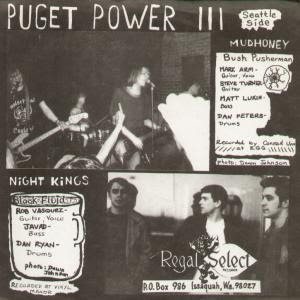 Get them all via a handy zip file here.

Listen to Grunge Live on Record

A short break between our regular posts to further pimp the following: 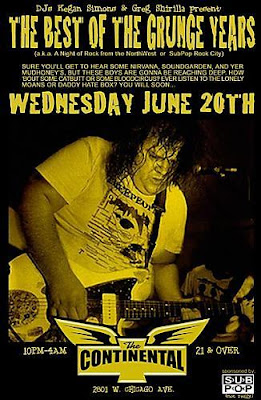 Brought to you by the fine readers Kegan and Shirilla.
Posted by Lamestain HQ at 10:53 AM 3 comments: 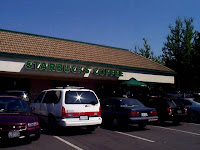 After reading last week’s entry, you’ve no doubt already booked a flight to Seattle, rented a car, and driven 19 miles on I-90 out to Issaquah. However, the temperature in Issaquah today is a cool 59ºF (15ºC), with 54% humidity and a mild 8 MPH breeze; having flown in from , you’re no doubt a little chilly. You’re in luck! While doing research on this beautiful city, we learned of not one, but two wireless hotspots that also serve coffee! It’s a small town, so just look at the photos we’ve included and walk around until you find a building that matches them. Once inside, you can write about the adventures you had while hunting down Regal Select Records’ founder Michael Goodall. 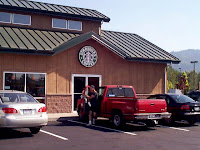 Gas Huffer opens volume two of Puget Power with the decent, if not brilliant, “Spinnin’ Disc O’Fire.” The Derelects have the record’s : a cover of Fleetwood Mac’s late-60s jab at Elvis, “Somebody’s Gonna Get Their Head Kicked in Tonight.” (Really, it’s more of a cover of The Rezillos’ earlier take on the song.) We already wrote about Gas Huffer, and someday we’ll cover The Derelicts, who merit a post of their own. During the heyday of grunge, they played unabashed, hedonistic punk. While their music was hardly consequential, it was fun. 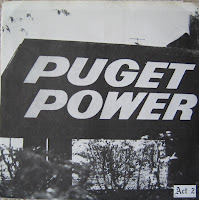 Yummy starts side two, and Alcoholics Unanimous closes it. I don’t know a thing about Alcoholics Unanimous. Yummy was one of James Burdyshaw’s post-Cat Butt projects; like 64 Spiders, he handles the vocals. I checked to see if somebody had posted a myspace page for Yummy, only to see that my search yielded dozens of pages. Probably wise of Bro James to have dropped that name. 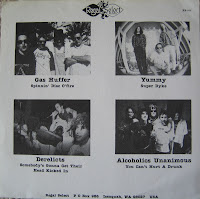 The songs are also on this easier-to-download .zip file.

On a different subject, if you didn’t read the comments for the Mudhoney/Sonic Youth, etc. splits below, one of our readers (DJ Kegan) will be DJ-ing a set of grunge at Chicago’s Continental (on California and Chicago) on June 20th. Kegan writes, “Sure you'll get to hear some Nirvana, Soundgarden, and yer Mudhoney, but these boys will be DIGGING DEEP. How 'bout some Cat Butt and Blood Circus?! Ever listen to the lonely moans or daddy hate box? you will soon...”

Daddy Hate Box? The Lonely Moans? I’m stunned! Regrettably, our six-month-old son keeps us at home and in bed on weekday nights, but other residents have no excuse. Go check this out! And please, let me know how it was.

While doing research for this week's installment, our college intern came across the below three paragraphs from a 1993 'Enjoy Issaquah' tourist pamphlet.

"From its humble beginnings as a mining town to its current, booming hi-tech industry, Issaquah, which is only seventeen miles east of downtown Seattle, has seen tremendous changes since it was incorporated in 1892. While the businesses on Main Street and the local economy may have changed, the town has retained its strong sense of community and down home heartedness. The townsfolk, most of whom have long ago traded their logger overalls for Khaki's and flip flops, are welcoming and good natured in a classic, Small Town American way. Walk down any street, pop into any business and you will be greeted with a warm smile by any one of our 11,000 local residents....

Perhaps visit Sherman's Feed Store and you might encounter Judy Lozano, whose unequaled knowledge of local bird-life might help you identify the small, red-winged flying bird that is nesting in your garage. Or perhaps you may meet Jeffery Bobbins at the Ole Barbershop on 25th and Lake Street and listen to his fascinating stories about how hairstyles have changed in his 35 plus years as a barber. If Gridiron is your passion, check out the Issaquah Eagles try for yet another victory while you cheer for Junior College bound Chip Darren so he might throw for 100 yards and two touchdowns in front of a cheering home stand.... Or maybe, you can talk about obscure garage rock with Regal Select Record's founder, Michael Goodall, at the summer record swap."

Not surprisingly, the pamphlet went on to further talk about Regal Select:

“Debuting with Tom Price’s post-U-Men band, the Kings of Rock, Regal Select has released singles by the Nights and Days, the Fall-Outs, the Mummies, Girl Trouble, 64 Spiders, Gorilla, Thee Headcoats, Yummy, and four Puget Power compilation EPs. The first Puget Power (catalog #008) single was recorded at Reciprocal Studios in 1989 and released in 1990 and featured otherwise unreleased songs by Rob Vasquez’s The Nights and Days, the Fall-Outs, Bellingham’s the Mono Men, and Sugar Sugar.”

We originally planned on doing a never-ending Regal Select retrospective series, but certain constraints (such as them not doing very many records) forced us to narrow it down to three parts so we will just focus on the first three Puget Power singles. The fourth EP, which features Flathead, the Statics, Sinister Six, and Head, was lost in transit when we sent it to our outsourced office in India to be digitalized. We will eventually come back to it at a later date.

As far as the EP, The Mono Men song features an early, pre-Mort line up; the still-going-strong Fall-Outs feature the classic lineup of Dave, Shannon, and Dino; Sugar Sugar featured Tim Hayes of Kings of Rock, Helldorado, Hormones fame and also used to take ¾ of my paycheck when he owned the much missed Fallout Records. He’s about to open a new bar on 65th in Ballard later this summer and will once again be taking most of my money. You can also learn more about the genius of Rob Vasquez and the Nights and Days here. 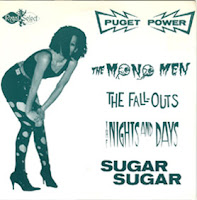 Get them all via a handy .zip file here.

As we’ve mentioned here before, we fondly recall the days when each new Sub Pop release spent a few weeks in the singles section at Cellophane Square before the managers “promoted” it to the wall behind the cash register and raised the price ten-fold. We can’t accuse Cellophane of fleecing the customers (well, I suppose we can), because they were dealing with simple supply and demand issues. People wanted these records, and they became scarce almost immediately upon release. Among the most coveted of those early records was the famous Sonic Youth/Mudhoney “Touch Me I’m Sick”/“Halloween” split. At one time—I’m not making this up—I read that it could fetch $400. (Apparently the demand still exists: somebody on eBay has a copy available for a mere $75). 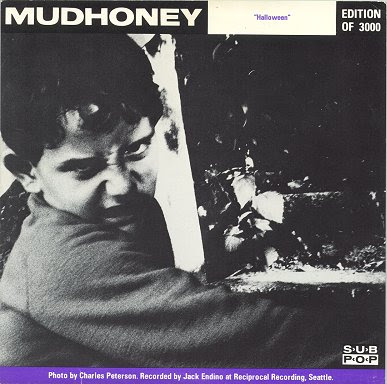 This single (we have the 12”) still makes me feel warm with nostalgia. Mudhoney sneers and drones through the Sonic Youth song, and Kim Gordon completely embodies the sickness of the Mudhoney track: she vomits, not sings, the lyrics. It’s great stuff. Sub Pop released it in 1988, before Mudhoney had even celebrated its first birthday and just after Sonic Youth cemented their reputation with Daydream Nation. It was the second single in Sub Pop’s deeply lamented Singles of the Month Club. 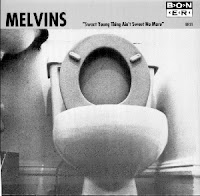 Less than a year later, Matt Lukin’s ex-bandmates, the Melvins, responded in 1989 with a Mudhoney/Sonic Youth split of their own: the Melvins tackle the B-side to “Touch Me I’m Sick” (“Sweet Young Thing Ain’t Sweet No More”), and Bay Area noisemakers Steel Pole Bathtub cover Sonic Youths “I Dreamed, I Dream.” Boner Records parodied the “Touch Me I’m Sick” cover and Sub Pop logo for the Melvins side and Sonic Youth’s Death Valley 69 EP for their side. Interestingly, Steel Pole Bathtub’s drummer, Darren Morey, formerly played in Mr. Epp and the Calculations with Mudhoney’s Mark Arm. 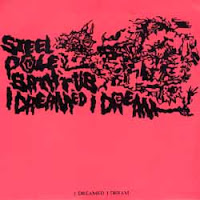 One web site claims that the Melvins recorded this record as a “diss” of Lukin’s new band. Although a Maximum Rock & Roll interview with Mudhoney indicates some tension between the two bands, I have a hard time believing that there was some Suge Knight/2-Pac shit goin’ down here. The Melvins seethe out the song, emphasizing how the song’s sinister undercurrent. Clearly, this is no pisstake.