If you had told me 10 years ago that Blood Circus and Cat Butt would reunite for a special one-time only gig at the Crocodile Café, I would have called you a stupid, lying asshole who needs to quit toying with my heart. Well, thankfully neither you nor anybody else made that prediction, so I do not have to eat crow and apologize. As we all know now, those bands along with Swallow, Love Battery, and Coffin Break played their first shows in way too many years, and it felt like the old days again–expect minus the goofy fashion and ridiculous media hype.

Sadly, ungrunge obligations prevented me from seeing the first half of Saturday’s show and my geezer-like stamina meant that I couldn’t also go to Sunday’s show, but all the bands I did see tore it up. Lamestain salutes the Flotation Records crew for coaxing band reunions and organizing the two-day event, and hopefully they’ll do it again next year.

We arrived at the Croc just in time for Love Battery’s set, and they sounded better than ever. The band played all their hits and featured original members Ron and Kevin on guitars, Mike Musburger on drums, and a new guy whose name I can’t remember on bass. Their psychedelic light show also made me feel like I was trippin’ balls, which is a good way to start the evening. According to their Myspace page, they will be working on a new record this fall, so hopefully they will start playing regular shows again.

Coffin Break followed with a tight set and sounded like they never quit practicing. I am not too familiar with the band’s Epitaph records stuff, but I did recognize a bunch of their earlier songs like “Pop Fanatic” and “Kill the President.” Their set was pretty much split 50/50 between their pop songs and heavy songs and the crowd loved them. Look for an exclusive, sure-to-be interesting Lamestain Coffin Break feature in the next few months.

Next up was Swallow who played the classics and also some songs from their finally released 3rd record, which is out now on Flotation Records. According to those in the know, the band sounds better now then they did back in the day. They also split their set between almost-poppy garage and gnarly grunge songs, and rocked da house. Singer/guitarist Rod was also one of the Geezerfest organizers; so once again, we raise our pints and salute his hard work. Swallow have also been playing around town, so check them out, yo.

And then it was time for the triumphant return of Cat Butt. It was the Journey to the Center of Cat Butt line-up’s first show is something like 17 years, but outside of looking older and less grungy, the band sounded great. It looked like the band had a great time, and it was cool to see them back on stage. According to rumors, Journey to the Center will enjoy a lavish CD reissue sometime in 2008. We recommend that you check back on Lamestain at least 10 times a day in case there is any late-breaking news. We can also report that David Duet and Dean Gunderson are now down in Los Angeles and play in the band Hot for Chocolate.
I also can’t help but think that Michael Anderson heard my cry last year and decided to reunite Blood Circus to give Seattle show-goers a much needed asswhoppin’. Thankfully, the band did come out and whip everybody into a shape. They played their debut single, which we all know is one of the era’s classic artifacts, most of the Primal Rock Therapy EP, and Sub Pop 200’s, “The Outback.” Sure they no longer look like the skuzzy biker dudes on their EP, but dammit, they could still kick out the jams. For proof, go to their Myspace page and check out some live clips.

Blood Circus was also selling a new Blood Circus CD compilation of unreleased demo and live songs. The cd songs came from various old cassette tapes, so recording information is slim, but the sound quality is great, and it’s cool to hear all the unreleased songs. They were also selling a fab new shirt and I would have bought one if I didn’t already spend all my dough on $5 beers at the bar. Hopefully the band will be selling these items online.

Go here for photos and here to buy Geezerfest posters and shirts, bubba.

Over the past couple of weeks, we’ve been examining the backlog of records we digitized and trying to get through vinyl we converted months and months ago. One of the records in that backlog was this nifty little bootleg: H.I.V. Groupie Hits Pack, a split single featuring the Melvins and Mudhoney. The recordings themselves kind of suck, and this comes nowhere close to being essential (unlike Soungarden’s fantastic Peel Sessions boot), but the record represents the boots common during the late 80s and early 90s in the Northwest.

Like a lot of young losers, we’d periodically hit the record conventions that would stop by , often in the hopes of finding unreleased goodies. It was very, very common to stumble across dealers who sold nothing but bootlegs, often in 7” format (other booted singles we found back in day include several Nirvana demos, a live Soundgarden single, and the Misfits’ Last Caress EP). The records cost twice as much as legitimate singles and, invariably, were mislabeled. That’s the case with this single, too.

The Melvins contribution, labeled as “The Sails of Charon”/“Just Sixteen” and credited to The Professors on the sticker, is actually a cover of Kiss’s “Goin’ Blind” recorded live at the I-Beam in San Francisco in 1987. The sound quality is so-so, but the performance makes up for it. The Melvins, of course, have a well-documented love for all things Kiss. They covered “God of Thunder” for the Hard to Believe compilation and were occasionally joined by Gene Simmons onstage. Best of all, when Kiss released Alive III in 1993, the Melvins played a release party at the now defunct club RCKNDY! For the hell of it, we’re throwing in the “Goin’ Blind” cover they later released on Houdini.

The Mudhoney tracks consist of, as far as I can tell, demo versions of “Here Comes Sickness” and “Sweet Young Thing Ain’t Sweet No More” and a live version of “Chain that Door.” The recording quality sucks. Furthermore, “Chain that Door” is mislabeled as “Eruption.” You can imagine the disappointment we felt upon playing this at home and failing to hear Steve Turner make mincemeat of Eddie Van Halen. I love these songs, but there’s no chance that these versions will displace the official versions. The sticker (intentionally) mislabels the band as the Psycho Surgeons, a real Aussie punk band who later morphed into the Lipstick Killers.

And the songs are on the .zip file here.

Item! alternative weekly The Stranger recently did a piece on “the best music blogs that you might not know.” I know that sounds bad, but worst of all, they didn’t even mention lamestain! One of the “ music blogs you should know about,” inexplicably, spends more time covering Fergie and Kanye West than actual music. We mention this not because we wish you to write angry letters or to burn down the offices of The Stranger, just to point out that, like Bob Pollard and The Simpsons, The Stranger was better in the 90s. 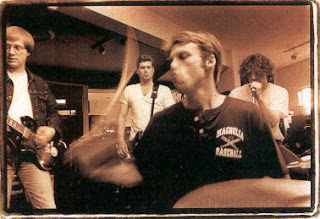 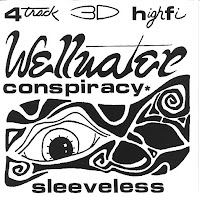 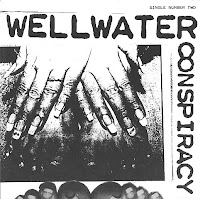 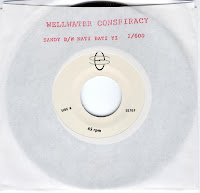