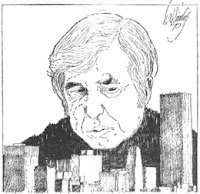 Emmet Watson. When Watson died in 2001, the obituaries listed “indignation” as a characteristic of his columns. Although Lou Guzzo and other shared this indignation, I have a softer spot for the crusty, curmudgeonly Watson. Watson devoted entire books to chronicles of ’s long-forgotten historical figures, but he led the half-serious Lesser Seattle/“Keep the Bastards Out!” movement (if you could call it a movement) in the late 80s, when literally hundreds of thousands of Californians moved to , , and elsewhere in the northwest. His concerns mostly regarded the potential for ’s unique characteristics and landmarks to be washed out with the tides of Californian ex-pats. Was he correct? I’m not sure. isn’t the same as it was 20 years ago, but those changes could have happened regardless of whether the demographics shifted. The Doghouse, Lelani Lanes, and Twin Teepees are long gone, but if I ever find myself in Andy’s Diner, I’ll raise a toast to Lesser Seattle’s biggest booster, Emmett Watson.

KJET. Steve here. For me personally, 1987 was also pivotal year -- that spring I graduated from suburban Kent-Meridian High School, and that fall I moved to Seattle's U-District to start my freshman year at the UW. My musical tastes underwent a similar shift, largely leaving behind classic rock for the more esoteric sounds of postpunk and new wave. Paving the way was Seattle's KJET, broadcasting in glorious mono at 1600 AM.

When KJET signed on in May 1982, it filled a niche on local airwaves as the only commercial station playing college/underground/what-have-you rock 'n' roll. Besides more established acts like the Clash, Devo and David Bowie, KJET spun loads of lesser-known bands: most never broke out of new-wave circles (Romeo Void, Camper Van Beethoven, the Hoodoo Gurus), though some achieved moderate success (the B-52s, Adam Ant, Oingo Boingo), and a couple became monster-ass stars (REM, U2). It was on KJET that I first heard the Pixies, Iggy Pop and the Replacements, all of which would soon rank among my all-time faves. And, most pertinent to this blog, KJET playlists were peppered with great local songs: "Twilight Zone" by the Visible Targets, "I May Hate You Sometimes" by the Posies, "Emma Peel" by the Allies, and the Young Fresh Fellows' "Rock 'n' Roll Pest Control." Of course, KJET also played loads of stupid '80s crap that I never wanna hear again.

The station was about as low budget as it got, with a weak signal at the far end of the AM dial and just one live DJ (for the weekday morning shift). Its tape-automation system, only capable of playing sub-five-minute songs, often malfunctioned: song titles announced by the pre-recorded DJs wouldn't always correspond to actual songs heard. Then again, the station had the best call letters in radio history (KJET!), and I loved that cool sonic boom always heard during station IDs.

Sadly, KJET abruptly signed off in September 1988, just as the Seattle scene was building steam. However, it no doubt helped calibrate the musical tastes of blossoming Jet City rockers. It certainly did mine.

Brain Pain. Jeff Gilbert hosted KCMU’s thrash/death metal show Brain Pain for several years. I can’t say for certain whether it aired in 1987, because there is nothing about it online, but 1987 sounds about right. Tom discovered it one evening in 1988 while scrolling over the FM dial and coming across Slayer’s “South of Heaven.” Tom and I would listen every week, even though 99% of the material sounded exactly the same, and even though 98% of that material sucked. Sure, he played Slayer, but he also played Wargasm, Possessed, and thousands of other bands never to be heard from again. Still, Gilbert was a huge presence around there, and we’d see him pretty regularly at shows and events. He also featured several local acts, like Forced Entry, Coven, and Bitter End, as well as Soundgarden—who sounded 0% like the other acts. Also, Brain Pain featured angry, despairing music—music for burnouts and losers--that bore no resemblance to the shlock found elsewhere on the FM dial, and that alone made his program interesting. Currently, Gilbert writes for and edits Mansplat magazine, available at finer strip clubs in the Seattle and Portland metropolitan areas.

(And of course, you can still get Lamestain's Awesome 1987 mix tape here.
Posted by Lamestain HQ at 5:21 AM

I found a practically brand new KJET antenna ball when going through my boxes of old stuff a few months ago and stuck it on my truck. So far no one has asked me about it, I was beginning to think I was the only person that remembered that great station! It was definitely a huge influence on my in the early and mid '80s until it went off the air.

I remember Brain Pain. It was on in 84 and 85, I went to the Metallica show on 3/17/85 at Moore Theatre and remember JG talking about it.

I remeber listening to Brain pain back in 88 ,also remeber first show in seattle for me was sanctuary slso at the Moore theater as well as having to hitch hike on the interstate back home to good ol east gate . Seen a lot of kick ass shows at lake city concert hall bunch of local Forced Entry and Accused shows usually at the ok hotel ,the oz was another venue back then . Fun times man miss those days