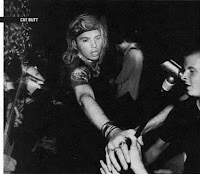 "Come on over tonight/We'll put on some Cat Butt 'n' do it up right." -- Guided By Voices "Pendulum"
A few years ago, a friend saw Guided by Voices at the Crocodile Café and mentioned that Robert Pollard went off on a drunken rant about disliking Bob Mould and Kim Deal and loving Cat Butt. Even in the birthplace of Cat Butt, I can’t imagine many of the show’s younger attendees knew what the hell Bob was talking about. Outside of the occasional joke about their band name, you don’t really hear much about Cat Butt these days. Their two records (which never made it to compact disc) are long out of print and are probably treasured more by dorky Sub Pop completists than by dorky modern indie rockers. So, Sub Pop, if you are reading this, please put some of that Shins money to good use and do a definitive Cat Butt reissue. In exchange for this project, we’ll pretend that you had nothing to do Big Chief, the Yo Yos, the Ten Minute Warning reunion CD, or that Moby single where he butchers a Mission of Burma song.

Anyhow, Cat Butt’s story begins in 1987 after Girl Trouble fill-in singer David Duet met up with 64 Spiders singer/guitarist, Brother James Burdyshaw at a party. The band, hugely influenced by Tim Kerr’s infamous Austin blues-punk band Poison 13, was filled out by guitarist John Michael “Amerika” and U-Men members Tom Price (bass) and Charlie Ryan (drums). This lineup didn’t last too long before Tom and Charlie left to reactivate the U-Men, but they did manage to record a 5-song demo with Endino’s Earthworm guitarist, Jack Endino. Except for the song “Big Cigar,” which ended up on the 1988 Sub Pop 200 compilation, nothing else from this recording session was ever released. Dean “Fly-Daddy” Gunderson and Erik Peterson then took over the bass and drum duties, and Cat Butt released their debut single, “64 Funny Cars” b/w “Hell’s Half Acre” on Volker Stewart’s Penultimate Records and Empty Records (Germany) in August 1988. Along with helping start Empty Records, Volker released some Derelicts, Stomachpump, Love and Respect, and Vomit Launch records on Penultimate before fleeing this one-horse town and opening a brewery in Baltimore. This marked the end of Cat Butt, version 2.0. Mr. “Amerika” was replaced by future Dwarf Danny Bland, and the band got called up to Sub Pop for their next record.
Even though we take an adamantly pro-Cat Butt stance, we also pride ourselves in our honesty, so we have to admit that this single isn’t very good. The band crowds the songs with too many riffs, and the performance isn’t very convincing. Really, you have to wonder why Bob Pollard would try to invite someone over with the promise of listening to this record. Luckily for the band, Bob, and us, Cat Butt improved with the Journey to the Center of Cat Butt EP, but that’s another story for another time, sonny. You can get off my lap now.

There isn't a cd of Journey to the Center of Cat Butt, that sucks!!!

Thanks for the *koff* "props," the beer industry is much less stressful to me than the music industry was, although my liver may pay in the long run. Now write about Love and Respect, you jokers.

maybe the new sub-pop spinoff-label will release a Cat Butt comp. word has it the label mistress is a big cat butt fan!

YAY! I FINALLY get to hear Cat Butt!!!

number one, BIG CHIEF didn't suck...look at the musicians in that band, ex Necros, Macdonalds, Laughing Hyenas, Tom Gemp, Born Without A Face. All these bands were kicking ass before you ever got a piece of ass. Go back to your hardcore days via 1980 and learn.

why would Sub Pop go backwards, haven't you seen the sales of the Shins and the Postal Service, duh!!!!!!

Doesn't matter if Cat Butt was great or not. Who you gonna talk about next, The Blackouts, Solomon Grundy, Treeclimbers, Night Kings????

Big Chief were great, you revisionist grunge doofus. Go crawl up Kurt Cobain's rotting asshole. Did I mention that you're a piece of shit?

A little late, but I totally agree. I love Cat Butt, but when I finally tracked down this 7" I was disappointed. Holler if you want some MP3s of "Journey" to post.

And yes, you DO need to write an article on Love & Respect.

Awesome, I just stumbled across your blog. I remember seeing Cat Butt for the first time at that skateboard contest Wake Up and Smell the Pavement and later once or twice at Washington Hall. Good times! I still spin the 12" every once in a while.

Lord knows how I got here, rather late too. I bow deep to Volker. For your perusal, over at my blog, deep in the bowels, on Feb. 13 2006, I posted The Love and Respect World Wide Web Presence. Mp3s and everything.

begging for a repost on this one--i've got the sub pop 200 comp, but i've never been able to find the single--

big chief?....laughable....they had an entourage....when they played kalamazoo we would just crack up at them....but then they would hit the stage....and we'd all shut the fuck up.....they were a machine of rock....and born without a face is one of the best bands youve never heard...i have both their singles.....great shit..

all the links is broken, please fix em all

Can you pleasepleaseplease fix the links! I feel cat butt deprived now. :(

i believe Big Chief were great, not just great awesome.

i believe Big Chief were great, not just great awesome.

Great research done by you for this article.

Grateful to you that you posted it over here.