Did Mark Arm Ruin Bloodloss? Our Most Controversial Post Yet 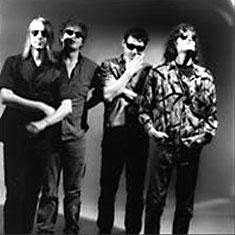 Without reservations, we declare ourselves to be Mark Arm fanbois. Okay, so while the Limp Richerds or Mr. Epp & the Calculations weren’t too hot, Green River, Mudhoney, and the Monkeywrench were some of the coolest bands to ever come out of the Pacific Northwest. While it took us a while to warm up to him filling in for the late Rob Tyner, we enjoyed the MC5 reunion/tribute show, and we also think it’d be cool to throw some Thrown Up songs on a mix-tape in between Drunks with Guns and the Strangulated Beatoffs. For the longest time, though, Bloodloss kind of disappointed us. The rock pedigree was there, and on paper, any band that included Lubricated Goat, Monkeywrench, and Mudhoney members should be brilliant, but for some reason, they didn’t live up their promise. Our first run in with the band was the 1993 Belltown records single, “Broke,” and while it featured one of our favorite guitarists, Sir Richard Bishop of the Sun City Girls, on bass guitar, it only lasted a few spins on the turntable before we shelved it for nearly 15 years. We heard some other Bloodloss songs here and there, but nothing made us forget about the members’ other projects.

This all changed about two years ago. Some friends and I were discussing Bloodloss at our favorite Ballard tavern when one of us (who shall remain anonymous out of fear of Mark Arm’s reprisal) piped up with this claim: “Mark Arm ruined Bloodloss.” Since I wasn’t very familiar with early, Australia-based Bloodloss, and since later, Seattle-based Bloodloss didn’t do much for me, I was curious to see if this was indeed true. Some phone calls were made, and a month later, a copy of Bloodloss’ second LP, The Truth is Marching In, arrived straight from England to our Seattle Headquarters for further Lamestain investigation.

Even without listening to it, I could tell that I was going to enjoy this record. It had an Albert Ayler song for an album title and a song named after Archie Shepp, and it was released on one of the greatest Australian punk record labels, Aberrant (home to Feedtime, Venom P. Stinger, King Snake Roost, etc). Plus, it was limited to 500 copies, which means I could name-drop it at record geek sausage parties and impress one or two dudes. Luckily, my expectations about the record’s greatness were met. The band sounded like a drunken mix between the Birthday Party, Flipper, the Fall, and Captain Beefheart, and we were forced to reconsider our friend’s claim that Mark ruined Bloodloss.

In order to be fair to Mark, though, we needed to pick up those later Bloodloss records and give them a fair listen. After some digging through the used bins, we found the “Face Down in Mud” single on IFA records and the Live My Way LP on In the Red. We also wanted to make sure that Bloodloss’ genius second album wasn’t a fluke, so we tried to find some other early stuff, but didn’t have much luck. Their self-titled 1986 cassette and the 1988 Human Skin Suit LP (both on Greasy Pop Records) are impossible to find, but we did track down a cheap copy of the 1989 King Snake Roost/Bloodloss split single on Crack records. While that single is great and all, the Bloodloss song, “Nutbush City Limits” is an Ike and Tina Turner cover, so it doesn’t give us much new insight on their earlier sound. For this reason and to keep everything simple, we will just assume that everything the band did while in Australia was absolutely magnificent.

After thorough examination, Lamestain concluded that Mark Arm did not ruin Bloodloss. Even though we certainly prefer the rawness of The Truth is Marching In to the slightly more produced Live My Way, we cannot claim that the band was ever ruined. The “Broke” single still isn’t great, but Live My Way has some cool songs on it. But since we are lazy bastards and digitizing vinyl is such a pain in the ass, we aren’t going include any mp3s from that record and will instead give you the harder to find Belltown and IFA singles.

With the evidence in hand, I have tried presenting the argument that Mark Arm did not completely ruin Bloodloss to She Who Could Not Be Named, but she refuses to listen to me and insists that I am being “geeky” and that it is “borderline creepy” to obsess over a 2-year-old bar conversation. To that I say, “Nuh uh!” 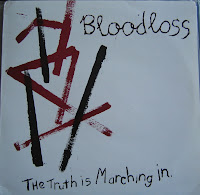 Bloodloss - The Truth Is Marching In here.

"Broke"
"Hair of the Future"

"Face Down in Mud"
"Love Theme from Bloodloss"

The singles can also be obtained via a zip file here.

Bloodloss were truly great, and if mark Arm didn't ruin them it was their fucking move to the USA. Great to see Guy Maddison in Mudhoney nowadays, but where are the rest of the boys. I love all of their records, except the first LP which has a Lydia Lunch-like lady singing. And one of the fuinniest things was that I actually saw a Bloodloss show, when I went to see Helios Creed. Also on the bill: Lubricated Goat, but since Stu was kept in the hospital cos of a knife attack, the guys played as Bloddloss! But... I don't remember much at all, I didn't know them back then and I was drunk 2.

I just want to warning you that the links are broken

Great to read about a conversation that involves 1. Mark Arm, & 2. Bloodloss. (I'm a fan of both). My favorite album by Bloodloss is their 10" called Ten Rockin Inches of Rock Solid Rock (on SFTRI). I feel that this album is a shining example of Mark Arm and Bloodloss kicking much ass together. I wish they'd put out some new stuff. Great blog. Thank you!

Wow I'm like a year late to the party on this thread, but I must conclude that Mark Arm didn't ruin Bloodloss because they weren't ruined in the first place. The only thing in my mind that keeps them from being in the pantheon of great bands as opposed to just good is the fact that Ren can't freaking sing. Normally that doesn't bother me, but his vox are particularly grating in the not so good sense.

I think I have a reverse perspective. I saw every Bloodloss gig bar one here in Adelaide in the '80s, and people would turn up just to see Ren tune his gaffa-taped guitar. The band were always Ren and Martin and whoever else wanted to join.

I've heard the 'Mark Arm version', including the unreleased and unfinished album, but never saw them.
Strikes me that where-ever they took Bloodloss, they took the strange dragster with them.

Ren mostly played guitar and sax on the early stuff; and started sax in 88 or 89, I forget which, playing along to Albert Ayler and Funhouse.

Interesting blog you got here. It would be great to read a bit more about this matter.
By the way check the design I've made myself Overnight escort

can you repost this? thanks!!

it's all subjective, right? i dig bloodloss quite a bit. even the early stuff with sharon on vocals has some charm.

i love ren's voice. he's obviously not the greatest singer, but he has a lot of character. his songs on any given bloodloss album are usually my favorites.

for the most part, i think they should've left the vocals to martin and ren. guy's voice is, well, pretty horrid. i think mark did a good job as the guitar/organ player, but i think the songs he wrote/sang for bloodloss just ended up sounding like a twisted version of mudhoney because he has such a distinct voice. still, i think the song "the truth is marching in" (off of the live my way album, and featuring mark on vocals) is an exception - great tune all around, sounds like bloodloss too.

that being said, mark only sang a song or two on the albums - it was mainly martin and ren.

so, no, mark did not "ruin" bloodloss by any stretch. he was basically a fan/friend who joined the band and played a supporting role. he's also the reason they were signed to reprise (mudhoney was also briefly signed to reprise, so - do the math).

i guess if one believes that being on a major "ruins" a band, then, ultimately, the blame falls on that cobain guy.

bloodloss did record another record before they split up, but it was never released. i have a copy, it's great, and it's finally going to see the light of day via bang! records (spain). it's called i lost my head for drink and will be released in 2011.

ren is also back in seattle and playing with martin again. if you google "martin bland," you'll find his blog. he has uploaded some of the stuff they've been farting around with, among a lot of other things (eg, unreleased recordings and live stuff from bloodloss, live lubricated goat stuff, etc.).