Where Have You Gone, Michael Anderson of Blood Circus? 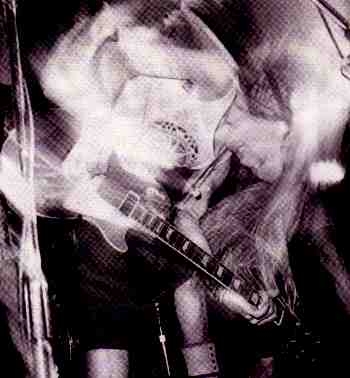 At Lamestain HQ, we don’t fully blame the kids for their awful taste in music. At first, we thought that kids today don’t want to rock, and we figured that is why so many of them illegally download Maroon 5 or Fall Out Boy records. Then we realized that these kids are also filling their iPods with Jet, Buck Cherry, and Godsmack songs. It’s not that they don’t want to rock–it’s that they don’t know how to rock. And really the only person man enough to teach today’s myspace generation how to truly rock is Michael Anderson of Blood Circus. Unapologetically loud, unpretentious, and not afraid of spilling beer or bumping elbows at a show, Michael Anderson would be a great role model for aspiring young rockers. The question is then where did he go and why doesn’t Blood Circus reform and teach this tired town a thing or two about rock? Sadly, we don’t know. All efforts (okay, only 2 efforts) to contact the band were unsuccessful; therefore, we can only assume that the band members are so disgusted by today’s terrible musical climate that they have gone into seclusion. We can’t blame them.

Following a short stint in Swallow, Michael Anderson formed Blood Circus in the late 80’s with guitarist Geoff Robinson, bassist Tracey Simmons (aka T-Man), and drummer Doug Day. Taking their name from an unreleased, no-budget sci-fi movie, Blood Circus made their vinyl debut in 1988 with the “Two Way Street” b/w “6 Feet Under” single on Sub Pop (SP13). Before the record-buying public figured out what had pummeled them, the band then contributed the song “The Outback” to the Sub Pop 200 compilation. The Primal Rock Therapy EP followed in 1988, and while it was released in between Mudhoney’s Superfuzz Big Muff and Nirvana’s "Love Buzz" single, it failed to turn 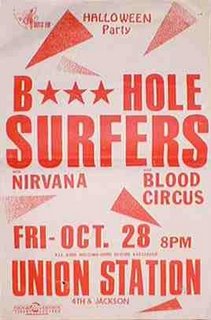 Blood Circus into rock stars or impress the fickle English music press. Like their debut single, the EP was recorded by Jack Endino at Reciprocal Studios and has sonic elements of the Melvins, MC5, and Motorhead. The EP also features the song “Gnarly,” which is noteworthy because it is the only grunge song about surfing. As Jon Poneman correctly once wrote, their records are the “grunge acid test.” If you want a singer with a Messiah complex and a message, look elsewhere. If you want a band that just intends to crash your party, drink all your beer, and then puke on your new carpet, Blood Circus are for you.

After Blood Circus split in 1990, Michael was in Hard Belly Lloyd with ex-Swallow members, but as far as I can tell, did not release any more records. T-Man later joined Bro’ James’ post-Cat Butt band Yummy for some records and also vanished. Geoff and Doug’s post Blood Circus musical endeavors are also a mystery.

Luckily for you, Sub Pop was flushed with cash after Green Magnet School’s mainstream success, so they wisely reissued Primal Rock Therapy on CD in 1992, with their debut single and five songs from an aborted 1989 recording session as bonus tracks. Whether the band has more, unreleased songs tucked away in a closet or somewhere is unknown. At the time of reissue, the band did a couple reunion shows around Seattle and can briefly be seen destroying the Crocodile Café in the documentary, Hype. After that, the band descended back to underground Seattle, and we haven’t heard from them since.

While most people like to bring up how Primal Rock Therapy was panned by critics and barely sold any copies at the time, we are hippies and like to focus on the positive aspects of the record. Beside rocking harder than most 1980’s metal bands, the band also held up fairly well against the test of time. While the production might place them squarely in the early Sub Pop grunge category, their songs aren’t that far from sounding like some of the better, modern rock revival acts. So put them in the CD changer with some Monster Magnet, Comets on Fire, Ufomammut, and Big Business records, crank the volume, bust open a Lucky 40oz, eat some Cheetos, and then start breaking things over your roommate’s head. That’s what Michael Anderson would do.

Another in the list of bands I couldn't find shit by back in the day, here at last (in Maine everything that wasn't dressed in spandex had to be special ordered with a 30% success rate). Thanks so much LAMESTAIN!

Oh, how I love lamestain!

Lamestain - I salute you!! Easily the best blog in er... cyberspace! Are we in cyberspace still? Anyways! Yay! Long may you continue.

this is the total word

about the whereabouts of blood circus....I am told Michael is a farmer on Vashon Island, Doug lives on Beacon Hill, T-Man brews beer in Southern California (and recently came up to Seattle to record some solo acoustic stuff), no one knows where Geoff is.

i lived in seattle in the 90's and have now returned to ireland
i bought a les paul while there and on the back was written blood circus,i used it to jam with the band silly rabbit.i looked up blood circus a few years ago and got the re released cd and twasnt bad atall a raw sound.
j

you got the song of blood circus called "calling for lisa" ???

i want this fuckin song ...T-T

Thanks to lamestain for the press, err blog - we love ya baby.
For those who are interested, BLOOD CIRCUS has been booked to perform at a two day festival replete with three-rings of nail-biting action, dancing psychedelic topless hippie girls, magical dwarves, and a live donkey act, all under the big top, at the fabulous CROCODILE CAFE in swinging Belltown so bring the whole family! This fantastic event will take place on August 25th and 26th, 2007 so be sure to pencil this date into your calendars! The original lineup of the BC Boys have been rehearsing till their hands are bloody at an undisclosed location in Georgetown, so unless you're the type who doesn't like ball-busting and gut-heaving ROCK and ROLL smashed into your cranium then you best be showing up!
* and yes, jp_blogger, "Calling For Lisa" WILL be on the set list.

I will tell where Michael Anderson is today. While the world may not have understood his brand of face grating rock and roll (yet)- it did find there was a place for his creative skills. Michael currently co-owns an environmentally sensitive, restorative construction company based out of Seattle. It is called M.A.D. Restoration LLC. (gemadrestoration@gmail.com) His integrity and grit are still fully intact. I should know- I apprenticed under him. The day I walked on site I began an "amoeba" and since have evolved/graduated to "jellyfish" status. Occasionally, we get him to pick up his guitar and tear our skin off. Anyway, congratulations on your taste in rock.

Blood Circus now has a website - please visit often and "buy stuff."
Thank you for your interest in Blood Circus.

Somewhere, somehow there is still a faint echo of the true voice of grunge, but does anybody really want to listen?


- The guys from Blood Circus

I played bass with Doug Day, post Blood Circus/Heavy Into Jeff, in a band called Pillory with A Frames mastermind Erin Sullivan on vocals and guitar. We did record a few times at Electric Eel Zack from the Purdins. We split with Doug in late '92 early '93, can't remember. I tried to contact Doug via myspace, never got a reply! R. Hyde

For 50 bucks I'll give you his phone number lol

You can find Michael Anderson at: thevashonseed.bandcamp.com

I'm in a band with him