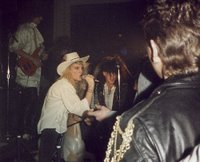 Nearly every musician has an embarrassing past. It's very rare for anybody to be in a good high school band, and most musicians have been in bands that they would rather not have anybody talk about. Sadly, with the advent of the Internet, your crappy high school band will not get lost in the dustbins of history. Like Pantera, Alice in Chains also had a glam rock past. Prior to his mega successful career as a gloom and doom hard rock/grunge front man, the late Layne “Candy” Staley sang in a Shorewood High School band called Sleze. Sleze eventually morphed into Alice 'N Chainz and recorded a demo before Layne joined up with Jerry Cantrell and his glam band, Diamond Lie, around 1987. Diamond Lie would soon change their name to Alice in Chains, ditch their glam rock image, hook up with Soundgarden’s management, and eventually become one of the first Seattle "Alternative Metal" bands to sign to a major label.

Alice 'N Chainz originally formed sometime in the early eighties with Layne on vocals, Nick Pollock on guitar, Johnny Bacolas on bass, and James Bergstrom on drums. In 1986, they went to the famed London Bridge Studios and recorded their first 3-song demo tape. Produced by Timothy Branom and engineered by former Enemy drummer, Peter Barnes (check them out on Killed By 7" 1-5 or Screaming Fists vol 2), the demo features a guest horn section, took them several months to finish, and cost them around $1600. While it's rarely discussed nowadays in the post-grunge and modern day indie rock age, Seattle actually had a pretty large hard rock/metal scene in the 1980s. Metal Church, Queensryche, TKO, and Rail were the big local bands, and bands like Mistrust, Heir Apparent, Myth, Overlord, and Fifth Angel were supposed to be the Next Big Things. Alice N Chainz should then be placed in this hard rock/metal context and not in the post-punk or grunge one, and obviously, their demo sounds nothing like their later recordings.

And according to the demo’s thank you notes, if you are “Blonde, Tan, Tastey [sic], And Tight,” the boyz in the band love you lots.

Oh yeah, “Over the Edge” is not the Wipers’ song.

AiC bassist Mike Starr -- no relation to Ringo -- wrote this book about his days in the band. It's kind of a mess.

Hi,
Thank you for clearing up the Alice 'N Chainz/Diamond Lie/Sleeze part. I never knew how it was exactly. Great site.

I'm glad to see someone address the early metal (pre-grunge) scene that happened in the Northwest. It's been overlooked. I remember Rail from growing up in Longview.

After my mom and I moved to Olympia in '83 I remember notorious metal heads "Metal Death Squad". Dude, METAL DEATH SQUAD. How metal is that? They were M-E-T-A-L. They were rad because they never really fit into the "scene" but they didn't care. They were kinda scuzzy/scary in that River's Edge sort of way.

Then you had Helltrout (a bit more grungey) and Scurvy. You can't beat Scurvy's "Drink Till I Poop My Pants".

But yeah, there were a ton of those bands around the NW during that time. Thanks for giving them their due.

i think some ex-Death Squad guys were playing in the Fitz of Depression recently.

I saw Rail throw down back in the day. The wee lead singer wore monster fuzzy moonboots! Man those dudes had a time. "Hello" rocked, and then rolled...

Hello,
we are experimental music zine
"Schizopoiesis"
we pick up your article.
because we like northwest sean
best

Well obviously he had no relation to Ringo Starr. Ringo was the stage name of Richard Starkley, you idiot.

the drummer of death squad played with fitz for a spell.

the guys in scurvy are still around and playing music.