In the post I wrote about the Wipers from December 2006, I mentioned that, someday, we planned to post some of the excellent covers of Wipers’/Greg Sage’s material. Well, patient reader, we’re finally making good on our promise. In the next week or two, Tom will write about covers by Nirvana, the Mono Men, and the Melvins, but I’m going to start with the much-lauded 8 Songs for Greg Sage and the Wipers, which Tim/Kerr Records released in 1992. 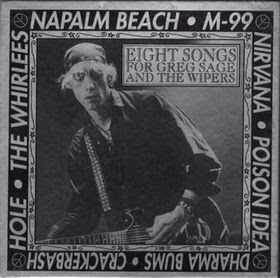 (Tim/Kerr Records, also called T/K at points, deserves a blog entry of its own, simply to emphasize (a) they have no affiliation with former Big Boy/Poison 13-er/Monkeywrecher Tim Kerr; (b) they have no affiliation with TK Records, home of KC and the Sunshine Band; (c) they released tons of great records by bands like Pond, the Wipers, Calamity Jane, Pere Ubu, Kurt Cobain-William Burroughs, Smegma, the Hellcows, and the Raincoats; and (d) they also released records by the god-damned Dandy Warhols and god-damned Everclear.) 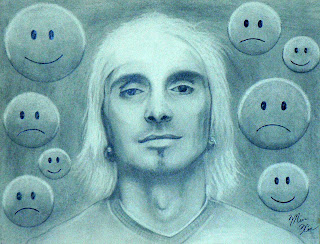 T/K expanded this compilation a year later, adding an additional six tracks by Nation of Ulysses, Calamity Jane, and others. We only have the original eight-song collection, which largely features other bands from the region, many of whom have a legitimate connection with the band. The label released the original as a set of singles, packaged in a silvery gray box. Now, for the track-by-track commentary.

Napalm Beach formed in 1980, and drummer Sam Henry had briefly played with the Wipers. They offer a grunged-out cover of “Potential Suicide.” Although Napalm Beach records were a constant presence in the bins at Cellophane Square in the late 80s, I don’t know much about the band itself. I like the songs on their myspace page. Good cover here.

Nirvana had already become famous by the time this cover of “Return of the Rat” appeared. My assumption is that Nirvana’s fame allowed them to pick which song to cover, as I’d venture that everyone wanted to take a stab at the Wipers’ most well-known track. It’s not bad, but the Mono Men do it better.

Poison Idea almost reduces “Up Front” to a straightforward hardcore slam, but the song resists this treatment. Overall, I’ve never been a big fan of this band.

The Dharma Bums offer a countrified take on “On the Run,” also from the solo record. The Bums sound more like Counting Crows here than was generally the case in the late 80s/early 90s, but it’s still a decent cover.

Crackerbash do the debut’s “I Don’t Know What I Am” and “Mystery.” They make these songs their own, adding a Rites of Spring-like breathlessness to both tracks. We really need to write about these guys sometime.

Perhaps the best cover on this compilation is Hole’s shambolic take on “Over the Edge,” one of the best Wipers songs period and one that’s especially well suited to Courtney Love’s caterwauling (I mean that as a compliment). It sounds as if the engineer didn't properly mix the multiple tracks of vocals together, but this only adds to the appeal. Sloppy, angry, and despairing. I'll even go as far as to suggest that it's every bit as good as the original.

The Whirlees reimagine “Land of the Lost” as a butt-rocking fist-pumper. The vocals remind me of Trey Parker’s fake hard rock growl, but despite of this cover’s problems, I like it. I even rather like the changes they made to the chord progression. Tom hates it. It’s the Icky vs. Stumpy Joe battle revisited! The Whirlees released an eponymous record on Schizophrenic Records in 2003, recorded by Drew Canulette, who also produced Ultramega:OK; that’s all I know about them.

And the songs are also on the zip file here.

Battle of the Joes: Icky versus Stumpy

Before we get to this week’s Smackdown, we should give mad props to Sub Pop for hosting such a great anniversary party last month. Bands were enjoyed, beer (more specifically, Elysian Loser Ale) was chugged, and dudes wearing House of Large Sizes t-shirts were spotted. The Vaselines and were the obvious highlights, but Mudhoney, Les Thugs, and Comets on Fire also tore shit up.

Sadly, record exec obligations prevented us from seeing the Fluid reunion show, but according to those in the know, the band sounded as great as ever. You can watch a video here. And what excuse could we have had to miss the legendary Fluid? Why the debut (and hopefully not last) live performance of the Drills! Patrick McCabe and Patrick Thomes played a smashing set at Drills headquarters and sounded amazing and nutty. The closest band I could compare them to would be Harry Pussy. McCabe recorded their performance, and we’ll hopefully be able to distribute it to the Drillamaniacs sometime.

Now back to the action in the ring.

Like the Civil War, the Icky Joey versus Stumpy Joe rivalry has pitted brother against brother. . . . Well, at least it has in our family. I am strongly in the pro-Stumpy camp, whereas William belongs to the pro-Icky camp. While blood has yet to be shed, online taunts have been thrown, and feelings have been hurt. Why is there such animosity between camps? Probably because we are bored and easily amused.

In the grunge corner, you have Icky Joey. Made up of Love Battery rhythm tag-team members Jason Finn and Jason Tillman, Icky Joey also featured vocalist David Lipe, guitarist David Rott, and guitarist/artist/Thrown-Up Ed Fotheringham. Icky Joey didn’t last too long, but they were signed to C/Z and left behind the Marron, Marron 7” EP, Pooh LP, and a song on Teriyaki Asthma Volume Four. Plus they opened for ’s, all-time greatest band, Killdozer. Really, that’s quite a pedigree.

Musically and stylistically, Icky Joey was Grunge with a capital G. They had all the benchmarks: Jack Endino production, Charles Peterson photography, wah-wah solos, and that snotty-and-proud punk rock irreverence that quickly went away once the Seattle Sound went national. Hell, Steve Turner even made a guest appearance on their record!

Now in the pop corner, you have Stumpy Joe. Named after Spinal Tap’s second drummer (who tragically died after choking on somebody else’s vomit), Stumpy Joe released records on Conrad Uno’s Popllama, Sicko’s Top Drawer, and Bellingham’s gone-but-not-forgotten Estrus Records. The band consisted of John Ramburg (vocals/guitar), Mark Hoyt (guitar), Christian Wilson (bass), and Scott Russell (drums), and most of their songs were about beer. “Drunk Idea” is their hit and has enjoyed a steady rotation in my head after I first heard it at a Popllama Picnic in the Park many battles ago.

The lines have been drawn and now it’s your turn to pick a side. Let the battle begin!

Get 'em all in a zip file here.