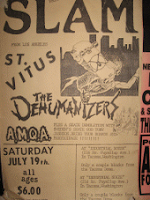 First, sorry about the French holiday between posts. Sub Pop has been gearing up the 20th Birthday celebrations with aplomb, and Tom and I were, traveling to or trudging away on a project for a class. No doubt, you’ve all picked up the reissue of Mudhoney’s Superfuzz Bigmuff by now (unless you already have all of the tracks).

A few weeks ago, my friend Blake burned me a CD of the Cats Are Neat EP by Apple Maggot Quarantine Area (that’s AMQA, for those in the know), a hardcore band from who banged around for a few years in the late 80s. It amazed me when he first asked me about AMQA, as they never exactly hit it big at that time. You’d see their name around town from time to time, but they lasted only a short while, didn’t release much material, and morphed into a speed metal band just as everyone else was exchanging their BC Riches for Fender Jaguars.

If you didn’t grow up or travel through the Northwest, their name seems like a non sequitur, like a splattercore version of, say, Stoney Bone Child. Not so! Apple maggots actually infest apples in parts of , such that the local government forbids people from transporting homegrown/non-commercially grown apples across state lines, if they had been harvested in a quarantine area. You can learn more about it--and I’m certain you do, in fact, want to learn more--here.

As far as the band goes, I can’t tell you much about them. Members included Snostrebla, Mike Crum, Kevin Johnson, Kevin Ladas, Paul Kimball, Flash, Dirk Bennet, and Bob Bulgrien, but not all at once. Bob later joined Seaweed, Mike Crum and Paul Kimball later formed HellTrout, Kevin Johnson played in Leaded and ScatterBuzz, and Flash was in Portrait of Poverty. I don’t know much about any of these bands other than Seaweed, although Helltrout shared bills with Soundgarden, Tad, Skin Yard, and Fitz of Depression. They followed Cats Are Neat (Subcore Records) with a full-length, Mutant Cats Are Hell (I’m sensing a theme here) on Ever Rat Records in 1988. By this point, they’d become more of a metal band. They also recorded an unreleased split with The Dehumanizers. Perhaps our friend Mort could tell us more about them.

I wouldn’t call this record essential by a long shot. It’s mostly interesting as a document of what else was happening in the area at the time. Also, I’ll note that they were regulars at the Community World Theater, a brief-lived venue in that hosted shows that will make the eyeballs pop out of your head. Example: Killdozer with opening band . . . Beat Happening?

The Cats Are Neat EP is on this zip file.

Our old file-sharing site, MediaMax, appears to have changed a bit, and I haven't had a chance to figure it out yet. So for the time being, we'll just use zip files and Sendspace.
Posted by Lamestain HQ at 10:56 AM

Usedta be signs along I-5 re: the Apple Maggot Quarantine Area. Dunno if they're still around. Helltrout were actually a pretty cool Olympia band. You oughtta do something on Horton Reflex records who released some excellent NW stuff back in the day (including a Helltrout record).

Tom and I were discussing Helltrout last week, because both of us remember seeing their name around quite a bit, but neither of us have heard them.

Any advice on where to start?

Can't say as know a ton, other they released an EP (or maybe it was an album) on Horton/Reflex, which I have a copy of somewhere. It was a real homemade-looking thing, but was good and heavy. The singer, Paul Kimball, went on to front San Francisco band Mordred who were kind of a funk metal band in the late '80s and early '90s. I think that's the extent of my knowledge about the band. I got the record when I was working at C/Z; I think we were helping to distribute it or something. I probably haven't listened to it in 15 years. Dunno if any of that helps...

Hey- Mike here, I was in both AMQA and Helltrout. I'm now in a band called Mico de Noche. Someday I'll be in a band that doesn't sport a completely ridiculous name, maybe.

The AMQA myspace has a bunch of the old recordings up on it. It appears that AMQA is now huge in Indonesia- I think this is the result of our record not selling shit in the states and then being used by the CIA as a tool to undermine fundamentalist Islamic dudes.... or something.

We haven't put any newfangled digital media together for Helltrout yet, but might someday. Helltrout released the e.p. on Horton Reflex (which was Dana from Bluebird Music in Enumclaw's label. Bluebird was a badass place for vinyl), 2 or 3 tracks on a vinyl comp called "It's the Water" featuring all Oly bands, and a CD called Vandinglefondle that we recorded with John Goodmanson at the Music Source.

Anyway, let me know if you want any more info on either of those bands.

Flash that was in AMQA now books Tacoma's Hells Kitchen... I think they were also on that NW Hardcore cassette tape comp with the Accused and a bunch of other bands. I sold mine, otherwise I'd give you more scoop on it.

Mike's band Mico de Noche are excellent BTW. And I totally forgot about Dana from Bluebird Music... I never went to the store, but he'd table at the record swaps in Lake City and I'd buy tons of stuff from him I wouldn't find at Fallout or on the Ave. Cool guy.

Thanks for the props Dan! If I can spam for just a moment...

Mico de Noche plays with Flipper at Hell's Kitchen on the 28th. Novoselic is still playing with them I believe. And my post-grunge-era hardcore band, Ample, is doing a reunion show at the monkey pub this Saturday. Come on out for some old man rock!

Damn, I'm gonna be in Vegas this weekend, I still wear my Ample tshirt you guys gave me with your demo tape when I was doing my old zine.

both the file sharing sites you are using seem to be having problems. The site for the individual files is moving to a new location, and the site with the zip files is missing many of the older file postings. can you please re-post. If not, can I arrange with you another way to get these albums? Thanks so much. please feel free to e-mail me at ropayne@sbcglobal.net

hi, I was listening to the only full lenght album from lonely moans on tupelo, and it seems that they have a vido clip for one of the songs,...

You have a great music blog here! I've added you to my mp3blog list and custom search, check it out.

I've collected over 5,000 mp3blog links, accessible from the alpha menu at page top. You can open frames on these blogs to view them directly on my site, and you can also view the feeds in a frame.

You can search your blog and all the others in my custom google search:

I haven't heard of AMQA, all I know is that they're a hardcore band i think.

Helltrout I heard of, haven't heard a song or even seen pictures of the band. I know i came across the band name many times. Sounds intresting.

Mico de Noche is playing with the Dehumanizers and several others for Flash's 40th birthday party at Hell's Kitchen on Oct. 4th, 2008. It's a Saturday night, so show up and get your face melted off by the molten hot metal. Or not. Should be good though.

Helltrout f**kin rocked! My Oly/Evergreen experience wouldn't have been the same without them. Those guys were true rockers. I remember my 1st year at Evergreen walking to the mods and getting almost knocked of my feet by their searing metal sounds. They practiced on the 1st floor of J dorm. It was great listening to them play, while smoking in the field.... That was my introduction to Helltrout. They were just MONSTERS live on stage. They opened up for the best bands around. I'd love to get my hands on their old cds.
Any thoughts on how???

("Suck my runny coffee sh*t you fucks"! --Mike @ werk at TESC yelling at the soccer kids in the summer)

Oh, btw: John Hodgeson did the art for the JAKE poster here