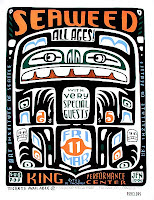 In the past, I’ve written about my first encounter with Seaweed: opening up for Gas Huffer at the in ’s central district. The room--the bottom floor of a building--lacked a stage or even proper lighting. I went with my friend Mira. Neither of us had heard of Seaweed by this point, who had only released a single or two. A few songs into their set, someone kicked a cable with his foot and cut off all of the power--the sound, the lighting, everything. If you’ve ever seen this happen, you know it’s a pretty funny experience: you get a few seconds of drums and the faint sounds of nonamplified electric guitar. After a few minutes, someone managed to find the affected socket and get things running again. It didn’t take long before a band or audience member again knocked out the sound.

Seaweed sounded great that night, as they did at each of the four or five times I saw them. They had a youthful, punk rock spirit and enthusiasm that many bands from that era (as awesome as they were) lacked. Not long after the first show, I bought some of their singles, as well as the Sub Pop Despised EP when it first came out. We later bought their first proper full-length, Weak, and the follow up Four (both on Sub Pop). I have pretty good memories of those records.

. . . which is why it was such a shock to hear the early singles and EPs again after so many years and to feel an undeniable sense of disappointment. I’m guessing that, as a teenager, I liked those early records because they served as mementos of Seaweed’s fantastic live shows. Listening to them now, I’m not moved at all. They lumber where they should sizzle, and the songs all kind of sound the same--a common criticism of the band at the time. “Star Girl” (from the self-titled EP) reminds me a bit of early Screaming Trees, and “Love Gut” has some Bleach-ish riffage, although the song sounds little like early Nirvana otherwise. Only “Foggy Eyes” (from the Estrus Half-Rack compilation) really rises above the pack, and that’s a Beat Happening cover. The remaining songs are basically mid-tempo punk, with dashes of emo and hardcore. Tom compares them to Dag Nasty and early Bad Religion. That seems reasonable to me, but I haven’t delved too deeply into either of those bands’ catalogs. 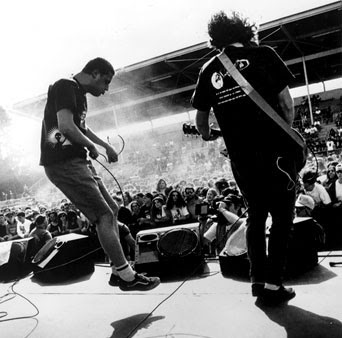 One bit of trivia I find kind of cool about Seaweed: they released songs both on K Records (motto: “Let’s hold hands and eat candy”) and Estrus Records (motto: “I’m gonna fuck you on the back of my El Camino”). I honestly can’t think of another band that had a foot in both camps.

The fellas likely recognized their own limitations. I can remember liking Despised more than these EPs and the full-lengths more than Despised. We likely have Despised kicking around somewhere; however, Sub Pop still sells it via their website, so we likely won’t post it. But hey, now you know where to find it! (They’re also selling an mp3 version of Four, but the CD isn’t in print; Weak remains out of print in all formats.)

The band’s lineup remained pretty consistent throughout their career (Aaron Stauffer, vocals; Clint Werner and Wade Neal, guitars; Bob Bulgrien, drums; and John Atkins, bass). Alan Cage took over on drums in 1999, as the band wound down. Jesse Fox has taken over on drums recently. Recently? Yep, recently: the band has been active again. They’re slated to play at Sub Pop’s 20th Birthday Bash, so make sure to catch ‘em. More can be found via their myspace page.

From the Estrus Half-Rack compilation (1991; Estrus)

The songs are all on this dandy-as-candy zip file.
--Wm
Posted by Lamestain HQ at 7:32 AM 24 comments:

Lamestains Across the U.S. (and France)

If Sub Pop was to become a World-dominating label rather than just a Seattle-boutique one, it needed to look for bands outside the Northwest. Sure, signing Soundgarden, Mudhoney, and Nirvana was cool and all, but if the label really wanted to be put on the global rock and roll map, they needed to add a Mad Daddies or a Lonely Moans to their line-up. Or something like that. Really, their first 100 records are pretty much a who’s-who of late-eighties/early-nineties underground rock. Everybody and their mommies know and love Rapeman, Fugazi, and the Dwarves, but here are some other less-talked about, non-Seattle bands.

Stooges and 60’s garage punk-inspired band The Fluid was the first non-local band on Sub Pop and recently announced that they will be reforming for some shows, including a spot at the big Sub Pop 20th Anniversary Party this July. Formed in Denver, Colorado, after the demise of hardcore legends, Frantix, the Fluid signed to Sub Pop in time for their second LP, Clear Black Paper. The Glue EP is certainly has the best sounding of all their early records, as well as being our personal favorite, but this week we are giving you the rarer, 1989 “Tin Top Toy” and “Tomorrow” (SP57) single. Remembered as a top-dog live band, the Fluid eventually signed to Hollywood Records, released their major label debut, Purplemetalflakemusic, and then called it a day. Members also went on to Seattle bands The Press Corp and Alta May.

Les Thugs were the first non-US band to record on Sub Pop, and if I remember my 2-years of French lessons correctlly, their name roughly translates to “The Thugs.” The 1500-pressed “Chess and Crime” b/w “Sunday Time” single (SP29) was their first Sub Pop record, and the band went to have around a ten-year relationship with the label. This single was released in between records by the Flaming Lips and former Chrome member Helios Creed, and it was a bit more melodic and punk rock than a lot of the other Sub Pop bands. Actually, everything the band did was pretty cool, and hopefully people will think of them more than just "that French Sub Pop band." They also announced on their website that they will be playing the Anniversary party as well as some shows in France.

I know pretty much zilch about the Lonely Moans outside that they might have been from Boston and were one of the few bands who had records on Sub Pop and Amphetamine Reptile. For years, I also judged the record by their covers and assumed that they were a 60’s garage rock revival act like the Chesterfield Kings or Cynics. Wrong-o, daddy-o. Instead, they were pretty much as grunge as you could get: sludgy riffs, plenty of feedback, and an irreverent snotty attitude. The 2000-pressed “Shoot the Cool” b/w “Texas Love Goat” (SP46) might be one of the least remembered early Sub Pop releases, and it certainly doesn’t command collectorscum prices, but it’s a pretty good, underrated grunge gem.

In an attempt to increase public awareness, we are also posting the uber-rare 1988 “Rockinerd” b/w “Welcome Home” single on Amphetamine Reptile (Scale 14). We are hoping that Lamestain exposure will encourage Sub Pop to invite the Lonely Moans to reunite at the Anniversary party. For the record, though, AmRep pressed 600 of these babies in between hot-ass singles by the Halo of Flies and the Killdozer and HoF-side project, Pogo the Clown. 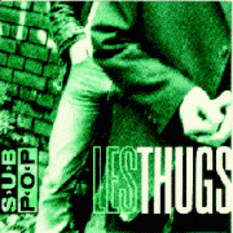 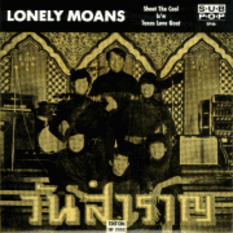