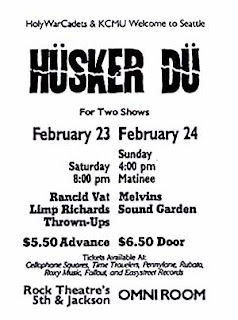 Regardless of what anybody tries to tell you, songs about bodily fluids are funny. In 1980s Seattle, the go-to band for songs about bowel movements was The Thrown Ups. Self-described “barf music,” the band crapped out three singles and a full-length and stained several compilations before breaking up in 1991. While Seattle prides itself today with its cosmopolitan tastes, we will never forget that she also gave birth to a band of filthy miscreants who once recorded a song called “Eat My Dump.”

Formed in 1984, the band was originally made up of bassist/mastermind Leighton Beezer (ex-Blunt Objects), guitarist Mike Faulhaber (what happened to him?), singer Steve Mack, and drummer Scott Schikler (ex-Limp Richerds). This line-up didn’t last long, as Steve quit, moved to the UK, and joined up with some ex-Undertones in the very-different-sounding That Petrol Emotion, and Scott joined the since-reformed Swallow. Leighton then recruited new band members Ed Fotheringham (vocals), Steve Turner (guitar), and Mark Arm (drums), and this is the version of the band that, according to Trouser Press, recorded some of “the most willfully inept objet de f’art ever knowingly committed to tape.”

The band convinced Tom Hazelmeyer to sign them to his new label, Amphetamine Reptile, who previously only did singles by his own band, the very cool and underrated, Halo of Flies. They debuted in 1987 with the 500-pressed Felch EP. They soon followed with the Smiling Panties (1987; 600-pressed) and Eat My Dump (1988; 600-pressed) EPs and appeared on the first Dope, Guns , and Fucking in the Street EP (with the U-Men, Mudhoney, and Halo of Flies) and the notorious Sub Pop 200 compilation record.

Some songs from the Felch sessions were also included on the 1990 Melancholy Girlhole full-length, but everything else was recorded by Jack Endino at Reciprocal in 1989. Amphetamine Reptile originally released this as a 1000-pressed 3x7 box set, while German label Glitterhouse released it on 12’ vinyl. AmRep also lovingly reissued nearly everything by the band on the 7 Golden Years CD, which you can buy here.

Leighton went on to play in Stomach Pump, whose single on Penultimate records we are still trying to find, and is also behind the official Thrown Ups webpage (there is also a great “unofficial” page here). He also played in El Grande Conquistador, although I am unsure whether they are still around or have released any records. Before Ed gave up the rock ‘n roll life for illustration, he also played in the Sad and Lonelys, Love and Respect, Icky Joey, Eddie and the Back Nine (w/ Flop), and Bushpig (w/ King Snake Roost members). Ed was only on the Bushpig AmRep single, while Steve Turner and Mark Arm were on the record. We’ll eventually post stuff by all of those bands, so sit tight, kids.

For now, though, take some time to reflect on the meaning of President’s Day and enjoy “Person in My Bowels (is Very Sad).”

The songs are on a .zip file here.

Perhaps the worst thing that can be said about Hammerbox is that they recognized the star-making possibilities inherent in a major label contract and that they were perhaps overeager to move their band onto a bigger stage. Most of the bands from that era (save Soundgarden) lacked a traditional, extroverted frontman. Hammerbox’s Carrie Akre, on the other hand, aimed to own the stage: she danced wildly, and she sang as if her throat had been coated in brass.

Now was this an entirely good thing? I vacillate on the matter. During their heyday, I considered Hammerbox to be among the cream of the crop as far as local bands went. I played their self-titled debut on C/Z Records (1991) a ton on my home stereo toward the end of high school and start of college. I saw them several times in small clubs and theaters and enjoyed them every time. A&R reps were apparently as common as mosquitoes, and a major label snapped up Hammerbox almost immediately. But the band’s sophomore album and major label debut, Numb (1993; A&M Records), let me down deeply upon first hearing it. At the time, it sounded polished to the point of blindness, and Akre’s voice was mixed above everything else. I already knew the songs from live shows, where they sounded much more exciting. (In retrospect, I hadn’t been fair. I’ve revisited Numb lately, and it’s a much better record that I thought initially. The rest of the band—Harris Thurmond on guitar, James Atkins on bass, and Dave Bosch on drums—make the meatiest contributions to the record, but I still think Akre’s yarling vocals get a little too much emphasis. But that’s a discussion for another day.)


“Size of the World”
We’re posting their first single: “Kept House”/“After All” (Big Flaming Ego Records). I’m not positive which year this was released but I suspect it preceded the debut by a year, so let’s say 1990. It’s a good single, and the band liked “Kept House” enough to put it on their debut. The B-side captures Hammerbox still learning their strengths but also falling into the same trap that ensnared many bands from that era. What was the trap, you ask? Funk. Yes, in 1990, too many of us thought that it was wise and fun to funk-ify our rock. Geez, what in the world were we thinking?

(It would be fun to write a Hall of Shame post that recounts the misguided forays by Northwest bands into funk.)

Revisiting the band, it’s now much clearer which part of the grunge spectrum they occupied: somewhere between the genuine article (think Nirvana’s “Sliver” single) and the stuff made by more commercial bands—that is, somewhere between grunge and “grunge.” Thus, I can identify where A&M found potential, but I can also identify the limits of their mainstream appeal. A&M clearly lost interest in the band sometime between inking a deal and releasing a record, because Numb received no promotion.

Although the band attracted a pretty large local following—enough to merit a spot in Hype!—they didn’t last long. After A&M dropped them in 1994, Hammerbox broke up. Carrie Akre has probably kept the highest profile of the former band members, but her follow-up project, Goodness, never interested me in the slightest, and we haven’t followed any the members’ subsequent projects, although the songs from Thurmond’s myspace page, linked earlier, aren’t bad at all. The band played a reunion gig at the EMP in 2004; YouTube clips are here and here, although I don’t care for these particular songs. 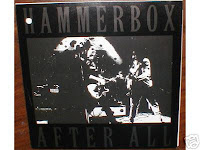 Kept House
After All

Both are on the .zip file here.

Some updates and some sad news

If you haven't skimmed through the comments, you missed former Rocket scribe Adem Tepedelen's comment in which he linked to an article he wrote ("Long Live Grunge") for Backfire Magazine. He makes the case for grunge much more eloquently than we've been able to do. It's a terrific read.

Also worth reading is "R.I.P.: Dead Nightclubs of Seattle," a stroll down memory lane by Seattle Times writer Tom Scanlon in which he revisits the sites of long-gone nightclubs and bars. We came across this link while reading Clark Humphrey's excellent Seattle-focused blog MISCMedia.

Now for the sad news: Former Skin Yard and Gruntruck vocalist Ben McMillan died recently of complications related to diabetes. He was 46 years old. We've mentioned before that one of our biggest musical regrets is that we never had the chance to see Skin Yard while they were still active (although we did see Gruntruck at the OK Hotel with Unsane and a couple of other bands), but frankly, that regret seems quite small in light of the fact that this talented, awesome man died at such a young age. Requiescat in Pace, Mr. McMillan.
Posted by Lamestain HQ at 10:53 AM 8 comments: