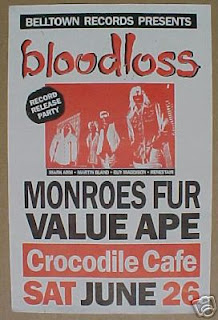 As every kid knows now, Seattle wasn’t the only place on the Earth where long-haired dudes abused fuzz pedals and played skuzzy, heavy garage-fueled punk rock in the 80s. Australia also had her fair share of grungy punk bands, and quite a few of them released records in the States. Yes, before Silverchair and the Vines, Australian bands like Grong Grong, Feedtime, King Snake Roost, and Lubricated Goat were performing some of the ugliest music this side of Drunks With Guns. With US labels like Alternative Tentacles, Amphetamine Reptile, Sympathy for the Record Industry, and Sub Pop releasing their records, the Aussies began crossing the Atlantic and settling in the Evergreen State.

One of the lesser known Aussie to Seattle imports was Monroe’s Fur, who arose out of the ashes of Lubricated Goat. Lubricated Goat released 1989’s “Meating My Head” and 1992’s “Play Dead” singles on Sub Pop. Group leader and former Salamander Jim member Stu Spasm eventually moved to the Midwest, married Babe in Toyland’s Kat Bjelland, and formed the band Crunt. Monroe’s Fur was then formed in Sydney by drummer Peter Hartley after he was kicked out of Lubricated Goat and originally featured Paul Gill (guitar), Guy Madison (bass), and Paul Kidney (vocals). This version of the band recorded the 1989 New World Order Catalogue LP; and you can find a sample song on the incredible website site, Black Eye Records Jukebox.

The “Fire” b/w “Green Horn” single came out in 1994 on Brad Gaub’s Carving Knife Records. Musically, it’s sort of similar to Bloodloss, who also reformed in Seattle with Martin, Renestair, Guy, and Mark Arm around the same time. The band also released “Coming into Land” 7” on IFA Records--who put out records by Bottle of Smoke, Zeke, Texass, and Bloodloss--and the self-released full-length, Sadistfactory. You can also hear a song from that record on the Black Eye blog.

Martin, Guy, members of the Thrown Ups and King Snake Roost, and Mudhoney’s Mark Arm and Steve Turner also recorded under the name Bushpig for a 1990 self-titled LP on PGK, which we will eventually post. Martin was also in the Monkeywrench and currently plays in Tom Price’s Desert Classic and leads the experimental/improv band Randomized Control Trials. Guy is now in Mudhoney, and Renestair EJ has since returned to Australia and plays in Peterhead.

As an added bonus, here’s Lubricated Goat’s censored-but-not-entirely-work-safe ‘In the Raw’ video.

First, sorry about the infrequent posts. We’ve been busy as hell these past few weeks and haven’t had much time to do anything, let alone digitize our Sick & Wrong singles.

Several months ago, I picked up a used copy of SST’s anthology of Screaming Trees, which covers their first five records: Other Worlds and Clairvoyance, which Velvetone Records released in 1985 and 1987, respectively; and Even If and Especially When, Invisible Lantern, and Buzz Factory, which SST released in 1987, 1988, and 1989, respectively. (The compilation does not represent the EP they recorded with Beat Happening. It’s been pretty fun to listen to this material again, although I wasn’t terribly familiar with it the first time around. Although I always had intended to pick up a copy of Buzz Factory as a teenager on the basis of the Trees’ reputation, it wasn’t until they released the Change Has Come double-single on Sub Pop that I actually spilled money on the band.

Change Has Come appealed to me immediately; when I heard a friend’s copy of some older Trees material, however, I lost interest in picking it up. My first impression was that it was too clean, too basic.

The reason I had this negative reaction is that I’d delved into their back catalog chronologically. When I revisited the stuff recently, it’s clear that Screaming Trees’ oldest material sounds like music by a high school band. It did not surprise me to learn that, in fact, the youngest member—Van Conner—hadn’t yet reached his 20th birthday when the band formed in 1984. But like Guided by Voices, it took a few years for the band to hit their stride. The earliest songs are, for the most part, better than I remember them being but still don’t set the world aflame; the songs from those later SST records are excellent.

"Transfiguration" live in Chicago in 1989.

I won’t delve deeply into the band’s history or the former members’ current projects, as the good reader-users of Wikipedia cover those subjects with greater authority than I can. I culled almost all of these tracks from the SST anthology, but for those who are interest in greater detail: “Barriers” is from Other Worlds, “Orange Airplane” is from Clairvoyance, “Transfiguration” and “In the Forest” are from Even If and Especially When, “Walk Through to This Side” and “Night Comes Creeping” are from Invisible Lantern, and “Subtle Poison” and “Where the Twain Shall Meet” come from Buzz Factory.

Note: we're having problems (surprise, surprise) with our archiving site, so we'll add the individual links later. Everything is on the zip file, and hey, that's easier anyway!