Giving the Gift of the U-Men

Christmas is always a busy time at the Lamestain household. Our Yuletide tradition of dressing up like Michael Anderson of Blood Circus (dressed up like Santa, of course) and handing out Yummy singles to the neighborhood children brought much joy and laughter, and we can’t wait to do it again next year. Plenty of eggnog was consumed, holiday ham was enjoyed, gay grunge apparel was donned, and Tad songs were caroled. Plus there were gifts! And we are saving your gift, which is also the best gift, for last: the U-Men Step on a Bug: The Red Toad Speaks record.

Produced by John Nelson and the U-Men at Crow Studios, Step on a Bug was released by Black Label records in 1988. Also released on cassette tape, this and the Hellcows LP were the only full-lengths on Black Label. Tupelo Recording Company also released this on vinyl, though I think they mostly handled overseas pressings. You can check out our earlier U-Men posting for more info and junk here.

We were also lucky enough to see the debut performance of the Tom Price Desert Classic a few weeks back at Fantagraphics Bookstore’s 1-year anniversary party. Tom fronted the band, and was joined by ex-Huffers, Don Blackstone and Matt Wright, Joe Kilbourne (the Derelicts), and Martin Bland (Bloodloss, Lubricated Goat, Monkeywrench, and our recent record discovery, Bushpig!) The band sounded great, and a great time was had by all.

We can't wait to open your gifts now. 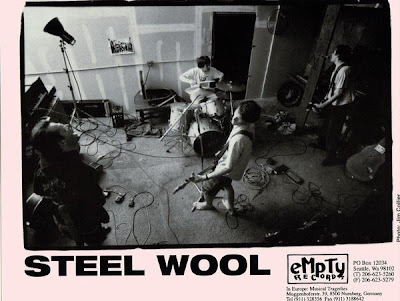 My first experience seeing Steel Wool live was in the living room of some house in . I can’t even remember which neighborhood it was. They played with the punk-pop band Sicko, and the sole attempt at soundproofing the room consisted of an old mattress, which someone had leaned in front of the windows on the side of the room. Within 20 minutes, the cops had arrived, and everything went quiet until the police left. Then, the rock continued.

Steel Wool never achieved, even locally, the plaudits heaped on other bands at that time. They formed in the early 90s, just after the national attention on had reached its fever pitch, playing a style they called “grange” (grunge with a little Hank Williams in the mix). They owe their biggest stylistic debt to Mudhoney—or, to be more accurate, Mark Arm and Steve Turner’s side project, The Monkey Wrench. I don’t mean to imply that they sound derivative. They took those influences sound of their own. Had they formed just a year or two earlier, I suspect that they would have attracted a much larger following.

The vitals: Steel Wool was Jon Wright on guitar and , Sean Hollowell on guitar, Dave Pelo on drums, and Steve Dukich on bass. Wright, Hollowell, and Dukich all shared the microphone, and Pelo also sang back-up. From what I can find, they released two LPs (Simple Men Who Like Working with Their Hands and Lucky Boy, both on eMpTy) and two singles (“Ian” on eMpTy [1992] and “Devil’s Night” [1994] on Bag of Hammers).

The mp3s are all from Lucky Boy, which appears to be out of print. (If someone can correct me, we’ll remove ‘em.) The entire record is at least pretty good, and a couple of tracks are completely excellent. The instrumental “60 Pound Wharf Rat” was, I suppose, their “hit”; they played it every time I saw them, and I even witness the aforementioned Sicko cover it once. “Pagan Baby” is a Creedence cover. I consider “Dog That Bites” to be their crowning achievement. It’s an utterly ferocious, garage-y song that would reduce Jon Spencer to a quivering little Kleenex-eater. If you’re only curious enough to download one mp3, well, there it is for ya’.

Jon Wright’s name has popped up on a few other records as a photographer; he also engineered Black Madonna by the Austerity Program. Steve Dukich briefly filled the bass slot in Mudhoney after Matt Lukin retired in 2001. Dukich played on Mudhoney’s Brazilian tour in 2001 and appears on one released song (“Who Will Be the Next in Line” on the Kinks tribute Give The People What They Want [Sub Pop]). I can’t find any information on Hollowell or Pelo, and internet searches haven’t yielded any information regarding current projects for the former members of Steel Wool. 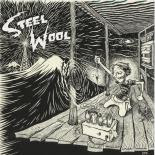 Karp – Punk in My Vitamins Tape 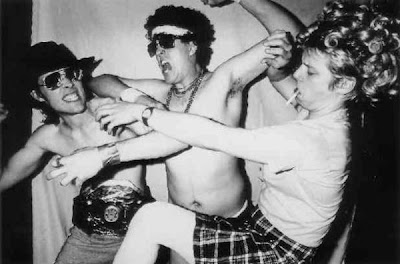 While we are all mourning the end of the compact disc era, we would
like to take a moment to reflect on the tragic demise of the cassette tape. Sure, mass-produced cassettes sounded awful compared to vinyl, were prone to jam or get eaten by your tape player, and would wear out quickly, but their affordability and the ease of copying made them a goddamn blessing to the underground community. Of course, now with cd-rs, cheap cd burners, and mp3s, it’s even easier to distribute your tunes, but we still feel a bit sentimental toward the oft-maligned cassette tape. From the UK Do-It-Yourself labels (like Fuck Off/Street Level, Deleted, and New Crimes Tapes), to the early K Records and Sub Pop compilations, to the 90s lo-fi bedroom labels (like Shrimper, Elsinor, and Union Pole), the cassette has had a rich, though largely obscure past. Outside of one-man, lo-fi black metal bands and harsh noise artists, it doesn’t seem like anybody manufactures them anymore, and few stores bother to carry them.

And that brings us to this week’s hot pick: the almighty Karp and their self-titled tape. Released in 1992 by Unwound bassist Vern Rumsey’s Punk In My Vitamins label, the tape is eight songs of Karp at their earliest and rawest. Featuring Jared on bass/vocals, Chris on guitar, and Scott on drums, the band’s line-up remained the same until they broke up in the late 1990s. Vern also recorded the band in Olympia’s State Theater, and several songs were later re-recorded for various releases. Some of these songs were also included on the Action Chemistry compilation CD.

The label–-also the name of Vern’s fanzine--released split tapes by Long Hind Legs and Kicking Giant and by Long Hind Legs and Mundt, a short-lived duo featuring Mukilteo Fairy/Tight Bro Quitty and Crimpshire drummer/zinester Aaron Cometbus; they later moved on to releasing vinyl. Sadly, I lost all of my old fanzines during a move, but if memory serves me right, Vern would often include a cassette tape with his ‘zine. Also, if I remember correctly, there might have also been some Thrones and Dub Narcotic tapes.

I’m not sure if Chris did much after Karp, but Jared later fronted the Tight Bros From Way Back When and then reunited with Scott in the great band, The Whip. Sadly, Scott died in a boating accident in 2003. Jared now does double time in Big Business and the Melvins.

The very fine blog Strange Reaction also did a Karp post here, and you can find a complete discography here.

Get them via zip here.

As a bonus, here's a live Karp show that our friend Jay recorded in Portland: