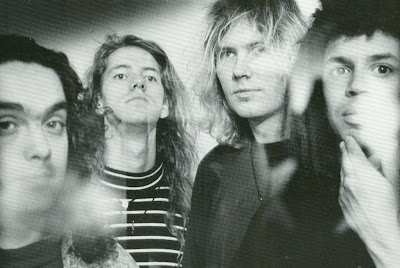 Example one: The first time I attempted to see Love Battery happened a little before they released Dayglo at an outdoor concert at ’s Mural Amphitheater. I went with a friend of mine who had heard me sing Love Battery’s praises. Love cancelled for reasons I can’t remember, but opening act Flop played a set of their anxious, loud, delightful pop. The weather that day was extremely sunny and warm, and we sat on the grass most of the afternoon enjoying the day. Love ’s cancellation seemed like less of a disappointment.

Example two: I brought Dayglo with me on a trip my wife, son, and I took to a Babies R’ Us outside of (as you can see, we still live the grunge life). Traffic stunk, as it always does on the way to ’s suburbs, but at least we had bright, sunny weather. My wife didn’t care much for the CD; she considered it pretty average. Strangely, Dayglo also sounded distinctly average to me at that point. This struck me as odd, because I love it otherwise.

Because you are discerning enough to read this blog, you’ve already noticed the connection: the sun shone brightly on both days, and if there’s one thing Love Battery wasn’t (at least during that period), it’s sunny weather music.

Love ’s home page notes, “This record sounds best on headphones,” and I agree. Especially about the “great” part. It’s been a favorite of mine during several autumn and winter mornings at work.

We finally saw Love Battery a year or two later at , around the time that Green River/Mother Love Bone alumnus Bruce Fairweather started playing bass, right before they released Dayglo’s follow-up, Far Gone. I recall that the stage was washed with purple and pink lights, with no spotlights. The dark stage lighting gave the show a brooding quality that complemented the echo-heavy guitars of Ron Nine and Kevin Whitworth (ex-Crisis Party) and provided a nice contrast to the shimmering melodies that ice the songs.

Some specs on the record: Jason Finn (future President of the ; drums) and Jim Tillman (ex-U-Men; bass) round out the lineup for this record. Conrad Uno recorded the record at Egg with some help by Posie Jon Auer, who, incidentally, produced the similarly dark, psychedelic debut EP by Truly. I’m told that some editions of Dayglo include the bands cover of Buffalo Springfield’s “Mr. Soul,” but I can’t verify this; my version doesn’t include this track. The record appears to be completely out of print, and I can’t find any indication that the band has copies to sell.

MediaMax has been inoperable for nearly a month now, so we’re using the (less user-friendly) box.net to host the mp3s. If you only have the patience to download a couple of tracks, I recommend “Out of Focus” and “ (Trane of Thought).”

Our computers have crunched the data and the results have been calculated, and we here at Lamestain Research Institute have now determined that, between 1990 and 1995, Seattle’s Flop were the Greatest Power Pop Band in the World. True, those years weren’t exactly considered the height of the power pop movement, and competition wasn’t too stiff, but still, Flop gets the Blue Ribbon. Sadly, the band was grossly overlooked in the grunge and alternative-era. While bands like the Rembrandts and Velvet Crush ended up on various Best of the 1990’s cds, Flop’s discography has gone out of print.

Flop followed the EP with the “Drugs” b/w “Action” (Sweet cover) single on their manager’s label, Dashboard Hula Girl Records, in 1991. Later that year, Dashboard Hula Girl also released one of the better tribute records, the Another Damned Seattle Compilation, which included Flop’s cover of “Disco Man” along with Damned covers by the Young Fresh Fellows, Fastbacks, Mudhoney, Gas Huffer, Skin Yard, the Derelicts, the Accused, and a handful of others. We’ll eventually get to that record when we do a Northwest Tribute Record Month sometime in 2011.

The band soon signed with Los Angeles-based Frontier Records, which went from releasing early records by bands like Suicidal Tendencies, the Adolescents, Circle Jerks, Christian Death, and Redd Kross to the less hardcore and much underrated Thin White Rope, Young Fresh Fellows, Dharma Bums, and Heatmiser (featuring Elliot Smith). They debuted with the Flop and the Fall of the Mopsqueezer record in 1992. Trouser Press rightfully wrote that it was “one of the ‘90s’ finest debuts,” and the record also featured a great version of the Kinks’ “Big Sky.” Following their first full length, they released the 1992 We Are You EP on the Spanish label, Munster Records. The tracks “Told a Lie,” “Hello,” “Anne,” and “Tomato Paste” were taken from the record, while the non-album track, “Doll” came from a 1990 recording session. A thousand were pressed.

Flop’s Wikipedia entry gives a great detailed band history and also does a good job talking about their second and third records, Whenever You Are Ready and World of Today, so we’ll skip them and cover some odds and ends. In 1994, Flop contributed their versions of the Zombies’ “She Does Everything for Me” and “Girl Help Me” to the Popllama record, World of the Zombies compilation, which also featured covers by the Young Fresh Fellows, Fastbacks, the Posies, the Model Rockets, and Carl Newman’s pre-New Pornographers band, Zumpano and we’ll also cover that record during Northwest Tribute Record Month.

Their last release was the 1000-pressed, “Scene 1 Act 1” b/w “”I am a Potato” (Devo) and “The Place I Love” (The Jam) single on Super Electro (SE 709). Flop also backed up Thrown Ups vocalist/Love and Respect and Sad and Lonelys member/illustrator Ed Fotheringham for a 1993 golf-themed EP, which was credited to Eddie and the Back Nine (Super Electro Records SE704).

After Flop broke up in 1995, Rusty re-formed Pure Joy for a couple of records, recorded a self-titled solo record for Kurt Bloch’s Book Records, released a solo 1999 Sub Pop single of the month, and now fronts Llama. Paul quit the band after Whenever You Are Ready and joined Best Kissers in the World for a bit. Best Kissers also featured Danny Bland, formally of Cat Butt. Ta-Da!

Mediamax is still down so get them all from the .zip file here.
Check out their video here.

Rod and Rob Daily from Flotation Records will be hosting Geezerfest 2007 at the Crocodile Cafe, August 25th and 26th.

Because it takes time and effort to digitize old vinyl, we’ve been tending lately to favor some of the more obscure records in our collection. Thus, we admit that we’ve been sitting on this one for a while: Soundgarden’s Louder Than Live, which I digitized late last year and which I’ve been wanting to post for quite some time. Because bootleggers seized on this one almost immediately upon its (very limited) release, one used to be able to find it reasonably easy at less scrupulous record stores and mail order vendors.

The Unofficial Soundgarden homepage gives the record’s history. In brief, A&M released the video of the same title to promote Louder Than Love, Soundgarden’s (fantastic) major label debut. The video contained five live songs plus the regular videos for “Hands All Over” and “Loud Love.” A&M simultaneously released a 12” vinyl version that added “Beyond the Wheel” and a CD that added “Beyond the Wheel” and “Hunted Down.” I have a booted version of the CD, although the bootleggers clearly used the 12” version to reference the track listing, as it contains an uncredited “Hunted Down.”

I owned the video at one point, too, and to be honest, I didn’t love it. The performances—from December 7th and 10th 1989 at the Whisky A Go-Go in , with short-term member Jason Everman on bass—are fine enough, but the camera fades in and out constantly and never stays at a single perspective for more than a few seconds. I think I would have preferred a straightforward video of the band over this collage. Perhaps its best appreciated as background viewing while you shirtlessly dust your furniture.

Performance of "Loud Love" from the same era but a different source.

As far as the songs? The performance epitomizes Soundgarden at their shambolic, pasty, sludgy, heavy best. The guitars don’t stay in tune, and Chris Cornell struggles to hit the high notes (especially when he’s also playing guitar). Somehow, though, they seem titanic, forcing their disparate elements (Led Zeppelin, the Melvins, a philosophy degree, rainy weather, shirtlessness, Sabbath, duct tape) to cohere by virtue of volume and carnal energy. Cornell later became a bona fide, mainstream sex symbol and rock star, and I have mixed (generally negative) feelings about his output since the early 90s, but at the time? As the t-shirt said, Total. Fucking. Godhead. 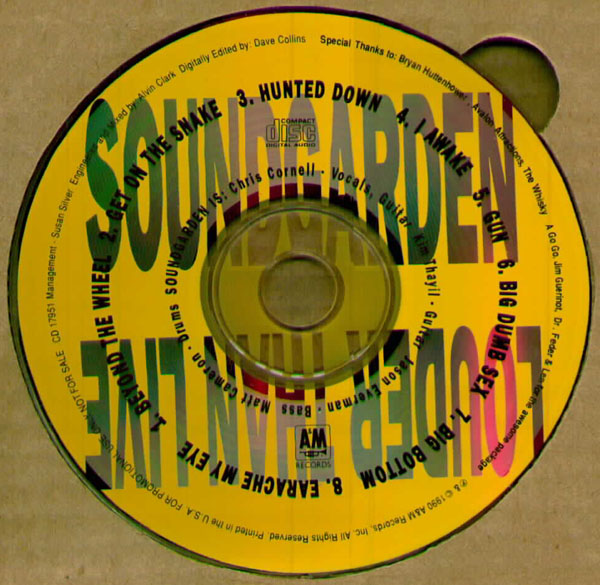 For some reason, MediaMax is taking an eternity to process the invidual mp3s, so for the time being, you'll have to download the .zip file to hear 'em.

Taking a week off

We're taking a week off to celebrate Independence Day in true lamestain fashion: by grilling up some Gardenburgers, washing 'em down with a couple cans of OK Soda, and blowing off a finger or two with some M-80s we bought at Boom City.

We'll return next week.
Posted by Lamestain HQ at 5:44 AM 5 comments: