With the rare punk record craze and recent documentaries like American Hardcore, the once-reviled US hardcore movement is having a slight resurgence. Once lost bands like the Fix and Koro have seen their impossibly rare records reissued, and it seems like rare hardcore compilations are getting released daily. Like the very briefly discussed metal and power pop scenes, Seattle also had a pretty healthy early 80s hardcore scene. Since Seattle did not have anything like a Dischord, SST, Touch and Go, or Alternative Tentacles Records at the time, the movement was far less documented than the DC, Boston, California, and Midwest scenes. Still Seattle had their fair share of loud, fast rules bands. The Accused and their legendary fathers, the Fartz, are probably the most well known Seattle hardcore bands, but bands like Solger, the Rejectors, RPA, the Drills (anybody have info on these guys?), and the Silly Killers also left behind some cool songs. 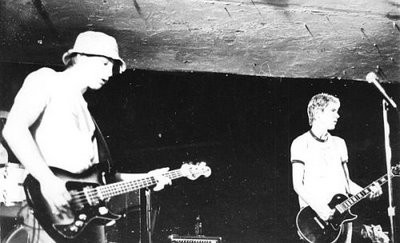 Another noteworthy band was Deranged Diction. Mostly remembered as the launching pad for Pearl Jam bassist Jeff Ament, the band also featured Green River and Mother Love Bone guitarist Bruce Fairweather and, once they moved to Seattle, future Swallow singer/guitarist Rod Moody. Their music was fast and pissed off but still less monotonous than your typical hardcore band. They would occasionally break the 90-second song rule and would sneak in the quick guitar solo (and even a bass solo for one song), which would probably annoy the hardcore punk purist.

Originally formed in Missoula, Montana in 1982, the group comprised skateboarding college students and was one of the few original bands in the area. Along with Jeff and Bruce, the band also featured former Renobs singer Tom Kipp and drummer Sergio Avenia. The band performed original material as well as Flipper, Circle Jerks, Black Flag, and Dead Kennedys covers during their live sets. In 1983, the band released a limited edition half studio/half live tape called No Art, No Cowboys, No Rules. The band also contributed a song to the 1983 Mystic Record’s We Got Power compilation LP and the 1984 Bad Compilation Tapes’ Eat Me cassette. Kipp then left the band when they decided to move to Seattle. Tim Healy filled in for vocals during last few Montana shows, and Rod Moody joined the band once they arrived in Seattle. The band eventually broke up in mid-1984, when Jeff and Bruce left for Green River.

Outside of an August 1993 Goldmine article about Pearl Jam’s family tree, Deranged Diction isn’t that well documented. Luckily, I tracked Rod down, and he was kind enough to answer a few questions about the band.

When were you in the band?

Why did the band relocate to Seattle?

I joined the band after they moved, so I'm guessing that Missoula was boring and they were looking to find a more active scene.

What did you think of Seattle's hardcore/punk scene at the time?

It was fine. Lots of fast, loud bands with lots of attitude and little substance. Of course, I'm old now, so I can say that. I was pretty removed from the punk "community" for the most part. Just went to shows, played shows, then jumped on the bus back home to my safety zone in West Seattle. Back then I thought it was pretty amazing though. Once things shifted into metal territory, I lost interest--temporarily at least.

Did the band tour at all?

No, just played Vancouver BC and Tacoma, once each.

Mark Arm once said that Diction went from being "one of the fastest bands around to one of the slowest and weirdest." How did that happen, and are there any recordings from this era?

I think he was exaggerating, because apart from a couple of slower songs (one dirge and a couple midtempo tunes) we kept things pretty fast throughout. But, yeah we were leaning toward the direction that early Green River eventually nailed. Jeff was moving away from his early influences like DC hardcore and was immersing himself in Bad Company and Kiss records. I started bringing my songs into the band, some of which were a bit more midtempo punk, and I started playing guitar with them, which crunched up the sound a bit. No recordings from this time apart from a couple of cheapo rehearsal tapes.

Did Tim Healy, Tom Kipp, or Sergio Avenia end up in any other bands?

Don't know about Healy or Kipp...never knew them. I do know Kipp is living in Seattle -- here's a link.
http://www.kexp.org/learn/popcon_kipps.asp

Sergio moved to New York over 10 years ago and began playing jazz with many excellent musicians and drove a taxi in Manhattan. He later moved back to Seattle. Andy from Swallow was playing jazz with him recently, and he tells me Serg is focused on piano now instead of drums.

Why did the band break up?

This is a bit hazy.... Jeff claimed in an interview that he didn't think the rest of the band was taking it seriously. I honestly can't remember what led to the breakup. I just recall us not practicing for a while, and then discovering we were no longer a band. I seem to remember someone else telling me that Jeff was jamming with Mark, and I was like "oh, really?"

Where you any bands in between Diction & Swallow?

Yeah, I was in a bar band playing covers. Mostly tasteful covers, at least.

I've heard rumors, but I'll believe it when I see it.

The below songs originally appeared on the 11 song No Art, No Cowboys, and No Rules tape and were later included on the BCT Eat Me compilation tape. 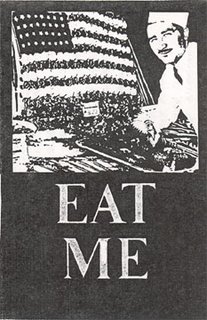 Borderless Countries Tapes, Schizophrenic Records, and Enterruption (now based out of the very cool Electric Heavyland record store in Wallingford) also reissued the Eat Me and I’m Buck Naked tapes as the Hardcore Amerika–the Reagan Years CD a few years ago. It might be out of print, but you can go here and see if there are any reissue plans.

Mad Props to Rod for answering my questions and go check out the reformed Swallow (we’ll get to them shortly) and his new band, Twink the Wonderkid.


Kill or Be Killed
Only
So Bad
Periscope
Not Fair
Aspirin

The links may not be active yet this morning. I'm working with our archiving company to address this.

The links are now working. Enjoy!

The Links not work now

Deranged Diction! I remember hanging out in front of the bank on the Ave. with Sergio.

Rejectors singer, Bruce Fogg is living in Olympia now, and actually has his "Strat" guitar up for sale on Ebay: Item number: 140199913125

Ah yes, the bank on the ave. was quite the scene. Taking the coupons out of the zines for free smokes and cashing them in at feelgoods. Panhandling for lucky lagers and weed in the park later. Catching the 72 downtown to the metropolis to check out Deranged Diction with the Accused,DSML and the Surfers. those were the days.......

Deranged Diction reunion shows: May 15 @ The Crocodile, Seattle / May 16 @ The Palace in Missoula. New double-CD out May 12!

DRILLS were 2 guys in Seattle who made off beat punk. I visited them once when I came up from San Diego and sang a song with 'em in their basement. They're on 2 BCT tapes. Here's the BCT catalog: http://www.geocities.com/chrisbct77/catalogwithpics.html

The Social Shopping websites are halfway between social media and e-commerce. Basically, using all the key aspects of the social web in terms of friends, group, affiliate, sharing, comments, all the world's favorite activity