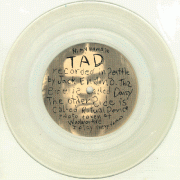 I had bought a drum machine and a Fender Jazzmaster guitar and started playing songs by myself and a drum machine. I had a Fender Champ amplifier that I played the guitar through an old Sun Beta Bass amplifier that I would put the drum machine through. I slowly taught myself how to play guitar and had many friends who were great guitarists gave me tips along the way. I quickly put together a few songs and in my mind I could hear the finished product. In June of 1987 I took my 1986 tax return refund of about $500.00 and bought time in a small 8 track studio (Reciprocal Studios) in Seattle’s Fremont/Ballard neighborhood with a friend named Jack Endino--Tad's MySpace page

Below, I noted an early TAD single that had eluded me because of the record store’s collector-level price tag; this was another. (SubPop’s Fuck Me I’m Rich compilation included the two songs, but alas, that is now out of print, and we sincerely doubt that SubPop will reissue it.) We later found a copy on vinyl. But at one time, in one region, this single was very much in demand.

Although these tracks should be credited to Tad the person and not TAD the band, a listen will make it clear that Mr. Doyle had pretty clear musical intentions before recruiting Kurt Danielson, Gary Thorstensen, and Steve Weide to flesh them out. It’s a template for later TAD songs: a steely, almost tribal rhythm section provides the song’s foundation, and a layer of feedback seethes throughout. “Ritual Device” (which a friend considers Tad’s best song) is the quicker of the two, whereas “Daisy” sounds like shin-deep mud, if mud had a sound. Both rock, of course: the former kicks you repeatedly in the chest, and the later pummels you with a tire iron. 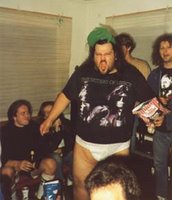 TAD lacked Nirvana’s pop sensibility and Soundgarden’s arena rock power and looks, so their failure to achieve anything beyond a respectable level of cult status surprised nobody. However, TAD’s best songs were incredible, and Doyle had personality and humor to spare. Sub Pop created a hell of a myth around the guy by emphasizing that he came from Idaho, dressed like a lumberjack, and had once worked as a butcher. In truth, he studied percussion and was smart as a tack. A long essay remains to be written about TAD’s sense of humor, but I don’t have the time to write it. Suffice to say that the band couldn’t have worked without both sides of his personality.

The nascent Sub Pop released “Ritual Device” in August 1988. Its catalog number is SP19. (For all intents and purposes, the catalog numbers for Sub Pop begin at SP10, so this was the label’s ninth release.) Both were included on Fuck Me I'm Rich, and "Daisy" was also later released on the "Wood Goblins" ep.

Everytime I saw TAD, Tad would moon the audience.

FYI, Daisy was also released on a Glitterhouse CD version of Salt Lick. I stumbled upon it quite recently.

It's Funny see Mr. Doyle with a t-shirt of The Sisters Of Mercy, jajajaja.